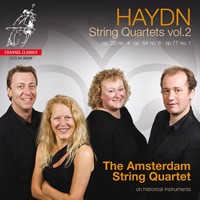 
Haydn String Quartets, Op. 20 No. 4, Op. 64, No. 6 and Op. 77, No. 1 Joseph Haydn's remarkable series of 68 string quartets encompasses, in effect, his entire compositional career. The ten works together comprising Op. 1, 2 and 'Op. 0' date from his 20s (c. 1758 - 1761); and the final nine works of Op. 76 (1797), 77 (1799) and 103 (1803) were written after the 'London' Symphonies, and in close proximity to his oratorios, The Creation and The Seasons. The stylistic journey Haydn took from beginning to end is striking indeed, on account of the extended time period involved and the inevitable changes in musical taste across Europe. The Op. 20 set (1772) is generally regarded as Haydn's first 'mature' contribution to the string quartet genre.

Two early, unauthorized editions ensured widespread dissemination - from La Chevardière (1774) and Hummel (Amsterdam and Berlin, 1779). The title page of the latter, in fact, with its engraving of a blazing midday sun, was directly responsible for the nickname that accrued to the set ('Sun' quartets); equally, the order in which the quartets appear in this edition established the order in which they have usually appeared in editions ever since. Op. 20 was widely admired in the late eighteenth and nineteenth centuries-by Mozart, Beethoven and Brahms (who owned the autograph scores) among others-and retained a prominent place in the twentieth-century concert hall as well....

The second volume in what appears to be a full cycle by the Amsterdam String Quartet allows us a more complete view of their approach to quartet playing in general and of Haydn's music in particular. They join a select group of players who use period instruments with gut strings, sparing vibrato and historically informed playing practices. Their first disc was much praised for the Quartet's crisp ensemble, clear articulation and beauty of tone, and those attributes are abundantly on display in this issue.

The Quartet have chosen programmes with a mixture of quartets rather than a catalogue-orientated approach. This means that they can release single issues without making collectors pay for double-disc sets, but some collectors do like their quartets in the published groupings. Here we have an early quartet from 1772, the fourth in Op. 20, a set representing Haydn's first mature quartet form (often known as the 'Sun' quartets after an engraving on the title page); the sixth from Op. 64 from 1790, the year in which Haydn was released from Prince Esterhazy's service, and the first of Op. 77 from the last of Haydn's works, published in 1802. We thus have a very good illustration of how Haydn's quartet style evolved.

Scrupulous in their attention to Haydn's dynamic and expression marks, the Amsterdam Quartet also choose judicious tempi for each movement. Slow movements go at flowing pace as expected in Haydn's time, the allegrettos are dainty and poised, allegros genial and often relaxed. Several of the quartets have fugal episodes, an expression of the intellectual content which Haydn's connoisseur audience expected; these are cleanly played and very effective. However, I felt that something was missing from these beautiful performances; perhaps a sense of drive and also more of Haydn's earthy wit and mischief-making quirkiness. In a movement by movement comparison, I found these in abundance from the Quattuor Mosaiques versions, which were more passionate, edgy and dramatic than the Amsterdam Quartet. The deeper resonances of Cristophe Coin's cello also added greater authority to the Mosaiques playing, which has more contrast and impact, if you like that sort of thing in Haydn.

Sonically, the SACD is impeccable, naturally balanced and with an acoustic halo that most evidently responds when the violins go above the stave. Channel's Digipak has a very informative essay about the music by expert Prof Simon Keefe. I would like to see the addition of the hob. numbering system in the titles as well as the Opus numbers (which are sometimes misleading), and it would be helpful to be told which Edition is being used - is it, for example, the new Peters Critical Edition of the quartets?

A very enjoyable set of urbane and humane readings, following the Enlightenment ideals which helped generate the music, in superb sound. 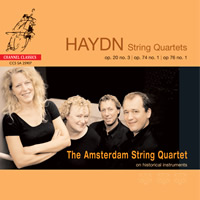