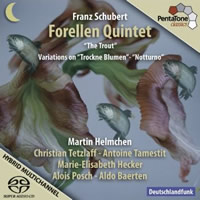 Schubert: Piano Quintet in A D.667 "The Trout", Notturno in E-flat (piano trio), Variations on Trockne Blumen (flute and piano)

PentaTone already have a fine performance of Schubert’s ‘Trout’ Quintet, in their RQR series, played by an expanded Beaux Arts Trio. However, that venerable version is over 30 years old and no doubt they felt that a new recording of this ever- popular piece was warranted, particularly as they now have under contract an exceptional young pianist, Martin Helmchen, who has already shown a natural affinity with this composer. This was an inspired decision, as the result is a wonderfully poetic yet virile account of this music that, for this listener, is an absolute joy from start to finish.

A fine pianist alone would not be enough, but Helmchen is fortunate to be joined by four superb string players who have coalesced brilliantly with him to create an outstanding chamber ensemble. Christian Tetzlaff, while perhaps best known as a soloist in the concert hall, also has a dedicated career as a chamber musician as do Marie-Elisabeth Hecker (cello) and Antoine Tamestit (viola), while Alois Posch is no less than leader of the bass section of the Vienna Philharmonic Orchestra. Tempi throughout seem ideal (slightly faster than the Beaux Arts in four of the five movements) allowing appreciation of the many subtleties of the performance, while marvelling at the way the way the players are able to communicate their sheer enjoyment of the piece.

Shortly after finishing work on his song cycle ‘Die schöne Müllerin’, Schubert composed a set of variations for flute and piano based on the melody of the cycle's 18th song, ‘Trockne Blumen’ (Faded Flowers). This work remained unpublished, and possibly unperformed, until 1850 when, as ‘Introduction and Variations on Trockne Blumen’, it was published as Op. 160. The work consists of a slow introduction, followed by the theme and seven variations. Though not a major piece of Schubert, it makes a delightful follow-up to the main work on this disc, particularly when treated with the respect lavished on it by Aldo Baerten and Martin Helmchen. The sound of Baerten’s wooden flute is particularly ingratiating and the un-forced virtuosity of his playing, particularly in Variations 5 and 7, is breathtaking.

Not a lot is known about the provenance of the single movement for piano trio that Schubert wrote in his final year that is now known as ‘Notturno’ in E flat. It is possible that Schubert may have intended it to be the slow movement of the first of his piano trios D. 898, but later rejected it for that purpose. Whatever its history, this short and utterly sublime masterpiece provides a perfect ending to this marvellous SACD. Helmchen, Tetzlaff and Hecker give the movement a heavenly performance that encompasses both the poise and calm of the lovely opening melody and the ecstasy of the turbulent middle section to perfection.

The recording, made in the intimate acoustic of the Siemens Villa, Berlin, is tonally accurate and beautifully balanced, allowing the listener to hear each individual player’s performance while still maintaining a coherent and homogeneous sound.

This is a wonderful release that certainly deserves a top recommendation.

Talk about core classical repertoire - Schubert's "Trout" quintet is a central as one can get. This is a piece that I have loved since I began discovering classical music some 35 years ago. I have listened to this work many times over the years. These days, I treat it as an occaisional treat to satisfy my musical sweet tooth - a nice bon bon after some particulary chromatic listening. Its nice to have this music in hi-resolution audio (this is my first Trout in SACD though the database here shows 5 other prior releases).

So, how does this newcomer stack up? Quite well actually. If one can name the stars of this performance, it is most certainly Christian Tetzlaff and Martin Helmchen. Tetzlaff's violin playing is nie on perfect. He has been an artists whose career I've followed for some years now and have never sound any of his work boring or pedestrian. I would welcome more performances from him on Pentatone (both chamber and orchestral). Similarly, Helmchen's pianism is excellent throughout - both sensative (but never weak or uninteresting) and assertive (but never overtaking the ensemble). The remaining players are fine too but they don't exhibit the outstanding artistry of Tetzlaff and Helmchen.

Sonically, this Trout does have a few issues. The piano is set a bit back in the soundstage and lacks a tab bit of sparkle in the upper octaves. The violin and viola, however, are wonderfully recorded and sound very realistic. Unfortunately, the cello and double bass are set too far back in the soundstage and lack definition. The bass especially is more of the one-note variety where you can feel its bloom but you miss its upper harmonics. The cello is reticent - I think perhaps its as much the player as the microphone placement because I hear the same characteristic in the trio performance. These sonic attributes keep this from having a top sound rating.

The piano trio movement "Notturno" is a beautiful piece. Again, Tetzlaf and Helmchen are wonderful in this piece. I just wish that the cello playing was a bit more asserive and present in the mix.

I am not a big fan of flute music but the Variatins for flute and piano were quite loevely to listen to. A wooden flute is used which has a mellower tonality compared to a metal instrument and the recording captures it well. The performance is excellent.

A very beautifully recorded disc that musically eclipses the competition on SACD and the vast majority, if not all, on RBCD.

On SACD Helmchen and friends strongest competitor is Schubert, Mozart: Quintets - Beaux Arts Trio, Grumiaux Quartet but a quick listening comparison soon shows the age of the RQR issue. Helmchen's team friends is quite a collection: Christian Tetzlaff (a world class soloist who makes his welcome debut to the format with this disc), Antoine Tamestit (a violist with an impressive set of chamber music making credentials), Marie-Elisabeth Hecker (an up-and-coming solo/chamber cellist), Alois Posch (bass soloist of the VPO!). Few collections of musicians rival this line-up in the Trout quintet. Many people, myself included, are wary of "dream team" ensembles for they frequently disappoint - not here though, this is the real thing and very impressive musicianship is on display that is all self-effacing.

Apart from not suffering with dated sound as the BAT do, the key difference here is the sheer joy that is heard in this account of the Trout quintet. The tempo's adopted by both ensembles are remarkably similar and this factor cannot account for the effect of the playing. It is rather the stylistic choices of the ensemble that make the difference, mainly the use of varied vibrato and greater emphasis on the accompanying lines. When heard in combination, the account takes on a distinctly central European flavour most appropriately - perhaps this is not surprising when one considers the background of the participants! One can pick any movement from the work and a musical smile beams out of the speakers. Quite wonderful and this account can hold its head up high against any company and certainly is the finest issued on SACD at the time of writing.

In the following "Variations on 'Trockne Blumen'", stiff competition comes on Masterworks for Flute and Piano - Bezaly, Brautigam. In many ways, these two accounts are complementary as Aldo Baerten uses a wooden flute instead of Sharon Bezaly's "traditional" metal instrument. The use of a wooden instrument imparts a much more limpid character to the sound and as far as playing goes all participants are exemplary in their respective accounts with honours even overall. If this is the piece you are searching out, preferences of couplings should determine your purchase.

To conclude this marvellous disc, one of Schuberts great uncompleted works is presented: the piano trio movement "Notturno". Here, this marvellous and sublime composition is played to perfection by Helmchen and friends. They really inhabit the serene opening and closing with something approaching transcendental beauty and their treatment of the contrasting middle section is no less fine.

The sound is wonderful: clear and honest with a wonderful sense of the staging - one could very much imagine the performers being in the same room. Made in collaboration with Deutschlandfunk, this Pentatone disc is a model of its kind for chamber music with piano.