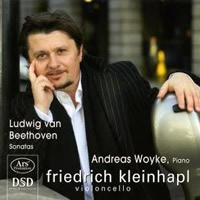 Beethoven's cello sonatas are amongst his most unruly compositions. Always ground-breaking, in their dramatic contrasts and lack of respect for classical sonata form, they at last firmly established the cello as a solo instrument in chamber music on a par with the violin. Although the cello parts in the sonatas are not technically flamboyant, they exploit all of the cello's registers but concentrate on its singing abilities. Virtuoso status is rather afforded to the piano, which has all the runs and short cadenzas which the young Beethoven required in 1792 as a young pianist arriving in Vienna to make a new career for himself.

Notably, Beethoven's title pages for these sonatas referred to them as 'Sonatas for Piano and Cello', emphasising that, in contrast to previous practise where the cello merely doubled the keyboard's left-hand part, both instruments had fully written-out parts and were equal proponents.

In his extensive booklet remarks, Friedrich Kleinhapl refers to his keeping the Beethoven cello sonatas at a distance for some time, feeling he was unable to come to terms with their challenge. He researched details of Beethoven's life in Vienna and the evidence from Beethoven's peers about his struggles to accommodate his boorish and rebellious manners in polite Viennese society. Always mistrusting and suspicious of others, Beethoven ploughed his own, often lonely furrow, but nevertheless gained respect from his noble patrons (to whom he showed little respect in turn). Eventually he won fame from his audiences.

Kleinhapl and Woyke's performances of the first three cello sonatas on this disc deliberately set out to reflect Beethoven's complex, rebellious personality, and were caught on the wing in 3 live performances in Graz, Austria. They are certainly to be counted with the best recordings, such as the classically poised, beautifully-toned and slightly understated Brendels (father and son) and the well-rounded, passionate Wispelway/Lazic duo (Beethoven: 5 Cello Sonatas - Wispelwey, Lazic). True to their motivation, however, the Kleinhapfl/Woyke partnership explores the wild side of Beethoven in these sonatas. Quixotic changes of mood, dramatic surges in dynamics, unexpected sforzando accents, sudden pauses, tempestuous episodes of grim humour, the balm of carefree joy and deep introspection are all there in the scores. These full-blooded interpretations are in a class of their own, perhaps not for the faint-hearted (or always making comfortable listening) but I found them both compelling and inspiring. In their own terms, they are revelatory.

These readings drew my attention, more than others, to Beethoven's frequent use of peasant music. There are frequent earthy stomping and dancing rhythms, together with folk-song like motifs which are often gleefully distorted (pre-echoing Mahler's own cynical use of Austrian folk elements). The Rondo of Sonata Op.5 No. 2 starts with a cheeky rustic tune which is taken on a whirlwind ride before ending in the best of high spirits. In contrast, the Scherzo of Sonata No. 3 (written alongside of Symphonies 5 and 6) is a tough and heavily syncopated rustic tune which is taken to a frenzied pitch of edgy development, a tour de force in Kleinhapfl and Woyke's hands.

Andreas Woyke's pianism is not at all inferior to that of Brendel or Lazic in these sonatas, and he is fully empathic to the vivid drama and wide dramatic range of his partner's approach. Using a crisply-registered Fazioli piano, he relishes Beethoven's love of staccato (attested by Czerny, Beethoven's erstwhile pupil), giving the sonatas a strong rhythmic foundation. The duo have a real sense of ongoing dialogue and exchange which is the true gift of fine chamber music players, as I noted in their earlier disc of the Brahms cello sonatas.

I had no idea that these performances were taken from live concerts until I read a note of this in Kleinhapl's commentary. The balance is fine, with the cello half left, piano behind, and neither instrument being too close. There is bloom from a hall which has no particular ambient character, and the rear speakers add a touch of realistic perspective. Remarkably, there are no noticeable audience noises, nor any applause. One has the feeling that these sonatas were recorded in long takes, such is the sense of concentration and dedication.

To hear these unruly works in these muscularly thrilling yet lyrical performances has been most stimulating, and I hope that the duo will record the remaining sonatas, perhaps with the sets of variations for cello and piano. As a single disc it is still desirable. 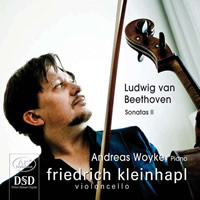