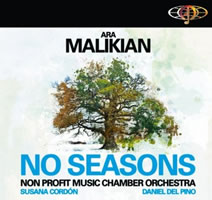 I'm still puzzled by the title of this disc, which actually contains three works about the Seasons! Perhaps it is inferring the absence of the Vivaldi 'Seasons', but there are some sneaky direct quotes from the Red Priest's work in the Piazzolla piece which heads the programme!

The Non Profit Music label is issued by a Foundation of the same name, and all profits are passed on to humanitarian work, including Médecins Sans Frontières. Jorge Grundman, the founder and driving force behind Non Profit Music, is a musician and composer himself, with a profound belief that music is a unifying and civilising force. As a secondary aim, the intention is to stimulate popular interest in 'Classical' music in Spain and to help reverse the declining numbers of students graduating from the country's musical training establishments. It is particularly encouraging that NPM are now recording in SA-CD multichannel.

This disc features the cumbersomely named Non Profit Music Chamber Orchestra (NPMCO), a Spanish-based string group with 12 violins, 6 violas, 4 cellos, 2 basses and ad hoc percussion. In multichannel they are convincingly disposed around the listener, adding greatly to the impact of the vivid and characterful music.

Following the 'discovery' of Tango master Astor Piazzolla by musicians such as Rostropovich, his works have become much-recorded, and probably subjected to more transcriptions than those of most other recent composers. 'Las Cuatro Estaciones Portenas' was originally instrumented for bandoneon, violin, electric guitar, piano and double-bass. There are several transcriptions of this so-called Latin Seasons for string orchestra, and the NPMCO use one by Russian composer Leonid Desyatnikov for violin and string orchestra. It was commissioned by Gideon Kramer, and often played by him in concert paired with the Vivaldi Seasons. The solo part is of concerto standard, and played here with great skill and evident relish by international artist Ara Malikian. As commonly found these days, he is recorded quite closely in the smallish Conservatory auditorium, but the surround sound disposition of the orchestral strings offsets this somewhat.

The Four Seasons of Buenas Aires are based on many metamorphoses of tango rhythm, and alternate jazzy percussive string-writing and high-energy rhythms with sections of softly seductive impressionism. The orchestral strings respond enthusiastically to mistreatment of their instruments by bow-bouncing, string slapping and body tapping effects, all impressively captured in full surround. The NPMCO's vivid and committed playing, from slashing secco chords to opulent, hushed atmospheric seduction, is thrilling. Malikian's performance is quixotically virtuosic and sounds like a spontaneous gypsy improvisation. Slyly, Leonid Desyatnikov inserted two direct quotes from the inescapable Vivaldi Seasons in the second movement; one for the soloist and later for the whole orchestra.

Turning from Piazzolla's primary colours, Joan Valent's 'Quatra Estacions A Mallorca' is primarily lyrical and based on a poem by Macu Sunyer (which is quoted fully in the booklet notes). He uses chugging ostinato rhythms similar to the Steve Reich style and adds a concertante piano part, sympathetically played by Daniel del Pino. His long yearning melodies might reflect folk and Sephardic influences. There are also some subtle percussion effects which appear in the centre rear - tom toms and atmospheric sighing wind sounds. In this piece, Ara Malikian's solo part seems to be played disconcertingly straight into a microphone as it dominates the texture - presumably this was a deliberate 'effect' of the balance engineer. It just about works in the modernistic context of the music. There are also some lovely solos from the orchestral cello, sustained and deeply emotional.

Jorge Grundman is a New Age and Classical composer born in 1961 in Madrid. His 'Four Seasons Over Madrid' is an elegaic recollection of a friend's sudden death, and revolves around the feelings of similar loss for an imaginary woman as a year's Seasons pass after his death. The part is sung eloquently by Susana Cordón, whose operatic experience allows her to build up a convincing character in this moving study, where she is in turn nostalgic, passionate and affirmative (albeit with a rather wide vibrato). NPMCO's strings provide extraordinarily rich and busy string textures. The final moments of the work perhaps approach Broadway and may seem excessively sentimental to some, but the long introduction to the piece, with a wordless vocalise by the soloist, entwined by solos from violin and cello, recalls Villa-Lobos and his Bachianas brasileiras.

Packaging, in a book-form digipak, is attractive and well-laid out, although the music is inconveniently not discussed in the same order as the programme. There are English and Spanish texts, richly illustrated in colour. The session photos helpfully show the microphones and orchestral layout, and this is just how it sounds in surround. However, for international distribution, a much more professional and idiomatic English translation is really needed.

An unusual and refreshing concert of music about the Seasons (despite its title); very well performed and with the extra thrill of being in the centre of the music for those with surround sound. Recommended, with the added bonus of helping charitable work. 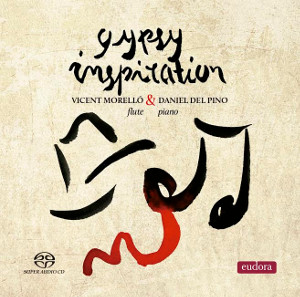