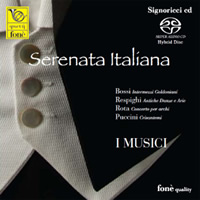 Italian audiophile label Fonè celebrate the 57th Anniversary of the legendary string group I Musici with this new straight to DSD recording (albeit unfathomably only in stereo). Many of my generation will have made their first encounters with Baroque music from I Musici's huge recording catalogue, and they also brought more contemporary composers such as Bartók, Britten. Hindemith, Martin and Rota to our attention. Eventually their long association with Philips fell prey to the collapse of the recording industry and their recordings were in competition with the burgeoning period orchestras and 'historically aware' performances.

Nevertheless, the group are still thriving, despite many changes in personnel. There are always some veteran members to pass on the tradition to new members of the group, ensuring that their reputation for a warm Italianate sound, tight ensemble and individual virtuosity is maintained. The present group, a democracy eschewing conductors, boasts 5 violins, 2 violas, 2 cellos and double bass; they play fine old instruments including several by N. Amati.

Recording engineer Giulio Cesare Ricci placed the group on the stage of a theatre with a fairly simple array of Neumann valve U47, U48 and M49 microphones, passing the signal through Signoricci preamps and cables to a Pyramix recorder with dCS convertors to DSD. Regrettably, however, the theatre is very dry and almost no ambience is captured (perhaps a multichannel set-up here would have helped). The result is that the instruments sound very close and lack sweetness and bloom, although their individual timbres are captured in detail. Furthermore, above the stave the violin sound is hard and somewhat aggressive at fortissimo, not what we expect to hear from the valve microphones. This effect is rather exaggerated by the relatively high transfer to disc, which caused me to rapidly back off my volume control the moment the music started. Interestingly, the fierce treble sounds are mostly tamed on the CD layer, although the overall sound is more grainy. I much prefer the bloom and air which Philips engineers consistently gave to I Musici.

I Musici's attractive programme reflects both their past and current repertoire, under the general banner of Serenata Italiana. This was my first encounter with Marco Enrico Bossi (1861–1925), a late Romantic and premier organist of his time, who established a training scheme for organists which is still in use today. His compositions included orchestral and chamber music, and his Intermezzi Goldoniani Op. 127 recorded here is a real find. It is a rather whimsical suite of dances (and the odd march) which provide a kaleidoscope of melody and textures which allow I Musici to show off their talents most entertainingly and wittily. Respighi's romanticised settings of ancient lute airs and dances are very well known, the 3rd Suite being almost a signature piece for I Musici, and they give it a fine performance; lilting, tender and passionate in turn.

Nino Rota is perhaps best known for writing the music for Fellini films, but he composed his 'Concerto for Strings' for I Musici in 1964, and dedicated it to them. It is perhaps a slighter piece of this genre than those by say, Tippett or Baciewicz, but its mixture of Romantic and more modern styles (with nods towards Stravinsky) are very effective, and again show off the group's interpretative and technical skills.

The concert ends with Puccini's lovely and sentimental Crisantemi (Chrysanthemums), an elegy for string quartet penned in 1890. The music was used again in the finale of Manon.

If you are interested in hearing the present-day I Musici in this repertoire, the performances are excellent. Despite the dry sound, their artistry shines through, and the bright upper partials can mostly be tamed with judicious use of one's volume control.