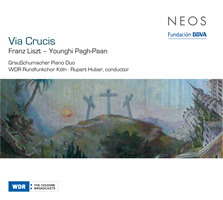 Via Crucis is Liszt's setting of the 14 Stations of the Cross to music. Incredibly it was first performed as late as 1929 and was frowned upon by the Catholic Church for whom it was intended. Unlike much of Liszt's music, he employs two pianos to support the chorus and 7 soloists (two main: Jesus and Pilatus, 5 step forward from the chorus). Far more introverted and less showy than his earlier output, this music is harmonically extremely daring and for all the apparent simplicity, it could quite easily show up singers of lesser talent than on this recording. Franz Gerihsen's Pilatus is commanding and he is highly convincing in his declarations of innocence for the blood of Jesus. The GrauSchumacher Piano Duo get to display their refined, solemn touch in Stations 4, 5, 10 and 13 which are instrumental; in this quiet, slow music their unanimity of ensemble is a joy to behold for it is one of the most revealing instrumental combinations of poor timing. Stations 6 and 12, unlike the rest of the text, is sung in German mainly beautifully by the WDR Rundfunkchor Koln under Huber's direction; the one exception is after a protracted a capella section in the twelfth station where the re-entry of the piano cruelly exposes a slight drop in pitch. Station 8 marks Jesus' entrance into the drama; Harald Martini has a light timbre for a baritone which lends the text poignancy in his pleading tone. Marvellous all round.

The other work, for mixed a capella choir, is Younghi Pagh-Paan's "Vide Domine, vide afflictionem nostram" (2007) which takes its inspiration from the letters of the Korean priest Yang-Eop Choe and the Responses for Good Friday. Starting with a dramatically imposing bass solo (Hee-Kwang Lee) the chorus starts conventionally for a few measures before quickly losing conventional tonality. The recording at this point is exceptional - the spread of the sound stage is extraordinarily wide and the relative depth accorded to the soloists is very telling.

Despite the one slip from the choir in the Liszt, this disc is well worth acquiring for such a compelling work that deserves to be far better known.