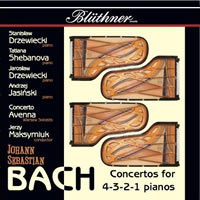 And, yes, it is multichannel. There is no mention of it in the liner notes nor on (the backside of) the box: There is a bit of an empty hall around it, and it probably is PCM, but the balance is OK. (Don’t sit too close to the surround boxes).

This disk fills a gap in the SACD repertoire (that was the reason why I bought it some years ago).

The four soloists are an interesting group from younger talented to older experienced players. Stanislaw Drzewiecki won the Eurovision Young Musician Contest in 2000, Tatiana Shebanova got 2nd Prize at the 1980 International Chopin Competition in Warsawn, Jaroslaw Dzrewiecki won the Ferrucio Busoni Competion, whereas the mature Andrzej Jasinski taught, amongst others, Krystian Zimerman (and the young Stanislaw Drzewiecki).

The Chef, Jerzy Maksymiuk, does not need any further introduction, I think.

While it is in the first place a ‘promotional’ disk, Blüthner have made sure that the musical content is as good as they feel their pianos are. Concerto Avenna may not be common currency, but their members are talented, mostly younger musicians, specializing in baroque, playing on modern instruments but ‘historically informed’. This said, the slow movements may be felt to be a bit on the ‘romantic’ side. But it is that part that brings out best the beautiful, velvety and intimate tone of these grands.

The Warsaw Soloists are, furthermore, not in the habit to ‘inflate‘ allegros into prestos, as some period bands and their followers seem to prefer. However, this is somewhat ‘corrected’ in the final concerto for (one) piano in f minor (BWV 1056), played by the young Drzewiecki.

Anyway, Bach can have it all; these concertos would probably sound just as fine if transcribed for trumpets.