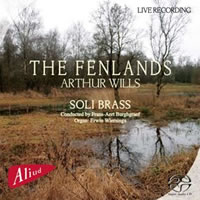 
The Symphonic Suite The Fenlands by the English composer Arthur Wills formed the pièce de résistance of the Cathedral Brass concert that took place on September 13, 2008 in the Koepelkerk in Leeuwarden. In this captivating and challenging composition, the composer reaches a beautiful synthesis between the brass band and its natural musical partner: the organ. The program also contains two rarely performed organ works by the English composer Percy Whitlock: a simple Folksong and a virtuoso Divertimento. The closing movement of Camille Saint-Saens Organ Symphony forms a finale to this set. “Just as I am” is an arrangement of a song by Wilfred Heaton, a piece from the Salvation Army repertoire. “Angels Watching Over Me”, also comes from the Salvation Army, but was recorded in the studio in 2006, here included as a special bonus track.

This disc is mostly comprised of a live concert in the Koepelkerk at Kuipers (Netherlands) in September 2008. Unfortunately almost no information is given in the booklet about the church, organ or Soli Brass, so I offer some results of my researches here.

The Koepelkerk was designed and built on a central plan by Kuipers in 1923. It is an octagonal brick-built structure crowned with a dome, and there are three short arms. The organ was originally built by Vermeulen for a church in Tilberg in 1935. It was moved between 1995 and 1997 to its present site and was given a new casing, of a neo-Baroque type with three towers. It is the largest organ in Friesland, with 49 registers, three manuals and pedal and runs on an electro-pneumatic system. The organ stands out in the main body of the church, above the pulpit, and is well-equipped for Romantic as well as Baroque styles.

Netherlands-based Soli Brass band has a history going back to 1936, having played at many festivals and concerts around the world. Its main composition is 6 solo cornets, 4 second cornets, 2 soprano cornets, 2 bugles, 6 tenor horns, 3 euphoniums, 6 trombones, 8 bass trombones, and there are three percussionists.

The concert begins with Arthur Wills' 'The Fenlands' Suite for organ and brass band. Long a organist/composer at Ely Cathedral in the heart of the Fens, Wills called the work a symphonic poem, and because of its intense nationalism, also considered entitling it "Fenlandia". The Fens are a large area of former wetlands in the east of England, bordering the North Sea. An important connection with the Netherlands is that the plan for their drainage was undertaken by Dutch engineer Cornelis Vermyuden, the work being completed in 1649.

'The Vikings' is Wills' title for his first movement; a vivid and frightening portrait of the devastating effect of Viking raids on the area. Although he quotes the 'Fate' motif from Wagner's Ring (which strictly has nothing to do with Vikings), Bernhard Herrmann's music for horror films is his main inspiration. The Second movement entitled 'Wicken Fen', refers to a mostly undrained part of the Fens; its name refers to witches, and the music is suitably creepy, sometimes recalling Debussy with rocking soft organ chords and elfin flourishes on bright 4' flute stops. The cornets are often muted and dissonant, and the eerie atmosphere is compounded by flickering high brass fanfares suggesting will o' the wisps produced by incandescent methane seeping from the marsh.

'Oliver Cromwell' is the subject of the third movement; a brave thing for a composer to attempt, as music does not easily paint successful portraits of people. Cromwell was a Fens-man, and became Lord Protector of England after the beheading of King Charles I. The movement begins with ominous deep marching treads on organ pedals and bass drum, and the General appears with majestic and purposeful strides from the organ. Drum rolls lead into his military career, with his cruelty and ruthlessness portrayed by abortive bugle calls, snide side-drum riffs and complex harmonic chord sequences from the organ. The music then recalls his triumphs by reprising the majestic theme from the opening, and finally subsides darkly.

'City of Ely March' is the last movement, and the most obviously English of the Suite. It is a truly festal piece in the line of Walton's 'Crown Imperial' and Elgar's 'Pomp and Circumstance' marches, and sets off at a fast pace with playing of brilliance and great virtuosity from band and organist. The central Trio section has a broad and noble cantabile tune from the organ, abetted by horns and euphoniums, before the cornets rev up and take the tune thrillingly to a great climax, when the quick march exuberantly returns. A glorious Coda ends the work with a resplendent statement of the Trio tune on the full organ, lavished by many descant fanfares from the brass.

Next on the programme is an organ solo by Percy Whitlock (1903-1946), a student of Vaughan Williams. 'Folksong' is the second of his 'Five Short Pieces', a richly allusive work which has all the warmth and trappings of the English Folk Song Revival beloved of his former teacher. Generally meditative, Erwin Wiersinga uses it to show off some of the characterful solo reeds on the organ, and the deep tones of its 16' pedal department.

The Soli Brass return with 'Just as I am' by Wilfrid Heaton (1918-2000), a piece much-loved by the Salvation Army. Conductor Frans-Aert Burghgraef in turn shows off the wonderful sonorities of his band, especially the solo cornets. Swelling climaxes really raise the hairs on the back of the neck, and the players' breath control is superb in this slow-moving and deeply affecting piece.

A last organ solo returns to Percy Whitlock; from 'Four Extemporizations' of 1932-3, it opens with delicate treble traceries like elfin Mendelssohn, and slips into an Elgarian tune of very English character, delightfully played by Wiersinga, who uses the echo registers of the organ to striking effect.

As a finale, the live concert ended with an arrangement of the last section of the famous "Organ Symphony" by Saint-Saëns, arranged for organ and brass by Philip Willby. The full organ bursts in and is taken up by the full brass band in as spectacular way as one could wish, overtaking many of the full orchestral recordings in power and vigour. I found I did not at all miss the strings and woodwind of the original score and the resounding conclusion was superbly captured by the engineers. My only problem was dismay at the undeservedly subdued applause of the audience; perhaps the church atmosphere was inhibitory. This is the only piece of applause on the disc, although there are signs from somewhat abruptly truncated reverberation at the end of other tracks that applause was excised. The audience, however, are as quiet as church mice during the music, and only cough and shuffle discreetly in some of the brief track lead-ins.

To make up the still rather short running time of 52'06", Aliud have added a studio recording from 2006 of Soli Brass playing an arrangement by Ray Steadman-Allen of the Traditional 'Angels Watching Over Me' , a beautifully burnished and moving interpretation.

Sonically, the engineers have found a near-perfect balance between the large brass orchestra and the organ. The latter, with its somewhat narrow casing, is given a central placing, behind the wide arc of the band. The octagonal building must have made microphone placing a difficult task, but the final vividly immediate and sharply-focussed 5.1 sound with rich ambience from the rears is something of a triumph. Organ pedals and bass trombones go deep and have punchy attack, while the high cornet tone displays all its sweetly complex harmonics superbly. The dynamic range is very wide, with tuttis positively visceral in impact. This disc is very exciting to listen to, a real feast for a good audio system. Capture was originated in DSD.

Photographs of Ely Cathedral and its organ, instead of the Koepelkerk and the disposition of the band in the church, although one photo of the organ casing is supplied. Brief notes on the Soli Band and the organ would have helped, one does not want to have to sprint to the computer and look up a website when listening to the music.

Performances are generally excellent; there are one or two slightly suspect entries from brass soloists and a temporary few moments of pitch determination between organ and band in one item, but these are expected in live performances and really didn't bother me. The music making and interesting programme on this disc has given me a great deal of pleasure, and I willingly recommend it. Play it loud and enjoy!