Dear AOS, What are you going on about. This disc is not a Mofi product. 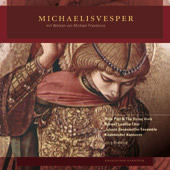 Rondeau Productions specialise in German choral music, featuring many of the country's famous boy's choirs, including the Thomanerchor Leipzig, once under the direction of JS Bach himself. This appears to be their first SACD, which is very encouraging, especially as it is such a fine effort.

Michael Praetorius (1571? – 1621) was one of the most prominent and prolific composer/players of the later Renaissance and Early Baroque in Western Europe. Son of a Lutheran Pastor, he became an organist (finally entombed in a vault beneath the organ of St Mary's Church in Wolfenbüttel) and a court composer, working in the Saxon court at Dresden from 1613 to 1616. His collected works take up 20 volumes in their modern edition, reflecting his work as a teacher, musical theorist and courtly ambassador. He introduced the new Italian 'cori spezzati' (divided antiphonal choirs) from Venice to the German music scene, together with other early Baroque styles, and infused the Lutheran Chorale with a new emotional fervour and metaphysical meaning by blending it with the new styles.

Jörg Breiding has followed Paul McCreesh's admirable reconstructions for DGG Archiv of celebratory services in historically aware performances by presenting us with a Vespers for St Michael the Archangel (from whom Praetorius took his forename). In doing so, he is rediscovering the composer's experimental large-scale vocal concertos and presenting this beautiful music for our modern ears, using all male vocal forces as originally intended.

Liturgically, St Michael's Day was the most important feast between Trinity Sunday and the first Sunday in Advent, and here we have the Vespers as Praetorius might have performed it on the eve of his namesake's Feast Day. The vocal mainstay of this Vesper Service is the much-recorded Knabenchor Hannover, of which Jörg Breiding has been the chief conductor since 2002. Boy soloists come from the choir, and four adult male soloists (Alto, Tenor, Baritone and Bass) are also employed. Several groups of period instrument musicians provide rich instrumental support: Hille Perl & The Sirius Viols (Descant, Alto & Bass Gambas with a Violone), the Bremer Lautten Chor (Renaissance Lutes, Chitarrone, Cittern, Bandora) and the Johann Rosenmüller Ensemble (Cornets, Alto, Tenor & Bass sackbuts with Bass Dulcian). Basso continuo is provided by several Postitiv Organs, Regal and Double Harp.

Plainchant introduces the Vespers and is interpolated at various points in the order of service, giving a liturgical feel to the whole venture (it is important to realise that for some time after the Reformation, there was a mixture of old Latin and new vernacular styles and texts in non-Catholic services). They are sung atmospherically from the rear of the front sound stage by a group of four adult singers (Choralschola) with flowing tempi and use of repercussion, a technique of lengthening a significant word by gently pulsing its note, which nicely adds life to the lines.

Breiding's reconstruction follows the known order of service in Praetorius' day, and chooses the appropriate motets, choral concertos and other standard elements of Vespers from sources which are meticulously noted in the booklet. As well as accompanying the choir and soloists, the instrumental groups replace vocalists in some pieces, a common Baroque practise, thus adding to and sustaining the listener's interest. Praetorius was widely known for his tuneful dance movements, and the dance element is never far away even in these devotional pieces, with springy rhythmic devices, tempo changes and also word-painting. He was also a fine melodist, and his combination of the old Lutheran chants with more modern Italian styles produced a wonderfully tuneful chant for some of the pieces, including the Credo. The Venetian influence is also much in evidence, with the antiphonal tossing to and fro of imitative passages in the polychoral works, of which the Magnificat à 6, 10 et 14 forms the splendid climax of the Vespers.

Performances reflect the best practise in contemporary scholarship on the Early Baroque. Breiding keeps tempos flowing and rhythms buoyant, but sometimes he produces a stately rendition, e.g. in the Laudate Dominum à 6, glowingly emotional with its slowly moving harmonies and beautiful melody lines. The boy soloists cope very well with their ornamented Italianate solos, and are nicely spaced across the sound stage. One or two of them, however, have 'small' voices and seem initially to be a touch nervous or perhaps inexperienced when singing with the fixed-pitches and tuning temperament of the viols. They do, however, gain in confidence as the programme proceeds. The piping voices of the young boy sopranos and altos is an attractive contrast to the rich and deep sound of the tuttis. In the Baroque, the age of puberty was much later than at present, and most choir-masters could count on having some sopranos as old as 17 or 18, and thus with bigger voices and greater musical and interpretative emotional experience.

I was very pleased that the recording producer and engineer resisted the boosting by close-miking of the boy soprano's sound. It sounds as if a relatively simple microphone technique was used. The sound stage has considerable depth, which is used by the performers to great effect, and the overall effect is immediate but placed nicely in the unobtrusive reverberance of St Osdag, Mandeksloh. The surrounds are mainly used for ambience, but in Komm Heilige Geist, Herre Gott, one of the boy soloists sings from the left rear. I also heard one or more cornets duetting antiphonally front-rear.

Apart from a good initial balance, the high definition PCM has a wide dynamic range and makes the most of the unusual instrumental sounds available, giving the tuttis a depth and richness which is deeply satisfying. It is not quite as transparent as a few of the very best multichannel choral recordings, which take one's breath away with the sheer presence of individual voices blending together, and clearly reveal all the internal parts, but it serves the music and the occasion very well indeed.

Rondeau Productions have packaged the disc with striking and attractive cover art. The booklet boasts a very thorough exposition of all the sections of the Vespers, using a number system to indicate the various instruments and singers deployed in each. Arne Spohr's booklet commentary is really informative, and places the work firmly in its historical context. What I did miss, however, was an English translation of the Latin and German texts. I realise that the booklet is already substantial, but to reach a wider International audience, this is essential. Also, it would have helped non-experts to have listed at least an English form of the unfamiliar instruments - many will not be aware, for example, that Zink refers to the Cornet or Cornetto, a family of leather-covered wooden pipes played with a brass mouthpiece.

I greatly enjoyed this disc, with its astonishing 80'48" happily pushing the SACD time-barrier. Jörg Breiding is to be commended for bringing this well-researched and thoroughly prepared reconstruction project to SACD, and I hope that listeners will support Rondeau Productions in their enlightened venture into high-definition sound. Such listeners will be rewarded with uplifting, joyful and often enthralling music-making of a high order.