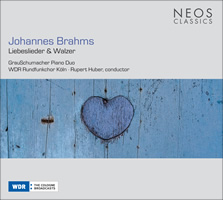 Brahms first visited Vienna in 1862; he over-wintered and in 1863 was made director of the Vienna Singakademie. Although he resigned the position after a year, he soon made his home in the city. One of the ways in which he thanked the Viennese (and also gained popularity in the city) was to compose waltzes for them; he was a great admirer of Johann Strauss II. Famously, he penned a comment under the first bars of Strauss' The Blue Danube "Not by me, unfortunately".

There are 49 waltzes on this disc, which might surprise those who know the composer only for his symphonies and concertos. Two of the three waltz sequences are choral, reflecting Brahms' long association with choirs in Germany as conductor and composer, and one sequence is for piano four hands. Duetting on the piano was very popular in the C19th and early C20th and a lucrative market for composers. Sitting close to a young lady on a duet bench and overlapping hands was a highly enjoyable method of courting!

The GrauSchumacher Duo, presently one of the foremost piano duos, elected to reconstruct the atmosphere of a performance of these works in Brahms' own time. They use a very well preserved and prepared Erard piano made in Paris (1839) which has a pleasant and varied light tone that blends well with a chorus. Its treble supports but does not cut through the singing as does a modern piano.

The highly popular first Liebeslieder Waltz set Op. 52 (1868-9) was followed in 1874-5 by a second set, Op. 65 in which the music is more vividly dramatic. Both use short romantic poems by Georg Friedrich Daumer, who alleged that his well-known collection was from a variety of folk sources, but the poems were actually his own. Brahms was following a tradition of vocal waltzes - the first version of Strauss' Blue Danube was for male chorus, for example. The WDR Rundfunkchor Köln under their conductor Rupert Huber use traditional performing practises for Viennese waltzes, with the familar slight rubatos, and a truly lilting interpretation results. The choir are placed with women on the left, men on the right, exploiting the many antiphonal effects woven in by Brahms, and evidently relish the music, singing with a smile and fresh tone. The GrauSchumacher Duo also make the most of Brahms' superbly crafted four-hand accompaniments, with a galaxy of ear-catching descants and decorations. The consistently high quality of Brahms' music is breathtaking; he meticulously crafts each short piece, threading them like precious stones on a necklace, varying tempos and moods as though they were mini-tone poems. They never seem like mere salon kitch, as playing and singing are natural and unmannered.

Between the two sets of Liebeslieder waltzes comes the more familiar set of Waltzes Op.39 for Piano four hands. Many piano students will have tackled this (or the solo piano version), only to find there are formidable technical and interpretational difficulties. Brahms was one of the great masters of variation form, and in a sense here he takes the waltz itself as theme and provides an astonishing set of variations. Grau and Schumacher make the most of this piece's many moods; there are waltzes which are passionate, skittish, gently seductive, boisterous, graceful, shy and coy. They made me realise for the first time how much the ghost of Schumann hovers over these waltzes; at times we are in the world of Schumann's 'Carnival'. Schubert's sets of Ländler are also acknowledged. The Erard piano shows off its range of tones and overtones, contributing character to the quieter music and glamour to the exuberant passages.

The forte of the Neos recording engineers is their support of the musicians in providing a realistic concert experience with beautifully-judged balancing. Multichannel adds extra perspective to the airy but not reverberant auditorium, complementing the intimate feel of the listening experience. Production values are high, the four-fold Digipack has a detachable programme booklet with excellent translations in French and English of the informative German notes, and the artwork is attractive. However, only the German texts are provided for the Liebeslieder, thus depriving many people of the poetry which underlies Brahms' wonderful settings. Shame, Neos!

To my surprise, I did not suffer the slightest symptoms of Waltz Fatigue on listening to this disc straight through. The stream of wonderful melodies, variety of moods and performers' enthusiasm proved irresistible. This disc is great fun and lifts the spirit.