Has anyone listened to this one from actual physical disc? At least 2 of 2 recommend this. The inlay card (viewable as an pdf file on Naxos Music Library) indicate the ...

That is brilliant news / information, many thanks for the up-date. Just what I wanted to hear! This will have cost me over £100 when the set arrives. The older we collectors ... 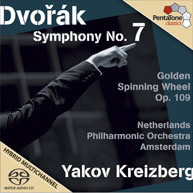 Yakov Kreizberg’s admirable performance of Dvorak’s 7th symphony is a refreshingly straightforward one, with sensibly chosen tempi for each of the four movements. It is also markedly less indulgent throughout than in parts of the earlier issues of Symphonies 6, 8, and 9, though nowhere does the performance lack affection. The debt to Brahms is never overplayed and the fiery first movement has considerable forward thrust. The lovely slow movement (Poco adagio) allows appreciation of the polished playing of the Netherlands Philharmonic Orchestra, particularly the winds and solo horn, but the uncertain string ensemble on the penultimate chord of this movement surely demanded a re-take? The Scherzo-Vivace is emphatically powerful and dramatic rather than lilting and Kreizberg seems determined to press forward, even in the contrasting trio with its horn calls and pastoral woodwind writing. The Finale is played with muscular strength and vigour bringing this satisfying reading of Dvorak’s finest symphony to an exultant close.

The Golden Spinning Wheel, (Zlatý kolovrat), Op. 109, is the third of Antonín Dvorak's four 1896 orchestral tone poems on subjects taken from the poetry of Karel Jaromir Erben. It tells the tale of a king who falls in love with a maiden, Dornicka. After he has invited her to his castle, her evil stepmother kills her, cuts off her feet and hands and removes her eyes, and substitutes her own daughter in her place. Unbelievably the king weds the evil daughter, but an old man stumbles across the remains of Dornicka’s body in the forest. He sends a boy up to the castle three times, to exchange three items, including a golden spinning wheel, for the hands, feet, and eyes of the dead Dornicka, and then proceeds to resurrect her. The golden spinning wheel turns out to be the stepmother's and daughter's undoing for when the king's new bride begins to spin, the magic spinning wheel sings out what really happened. The king seeks out Dornicka in the forest and the two are married, while the evil stepmother and daughter are fed to wolves.

Many would consider The Golden Spinning Wheel to be the best of Dvorak’s late symphonic poems, and when played without cuts, as here, it is undoubtedly the most substantial and compelling of these imaginative pieces. In his previous recordings for PentaTone of the other three of these symphonic poems, Kreizberg has shown a special empathy with their picturesque and programmatic storytelling, as well as their lurid content. Here, his evocative and energetic performance does full justice to the work and the events of the narrative that are graphically depicted in Dvorak’s wonderful music. He allows the glorious melodies of the lyrical sections to unfold naturally and relishes the drama of the exciting faster sections of the piece.

These recordings were made in the spacious acoustic of the orchestra’s home, the Beurs van Berlage, Yakult Hall, Amsterdam, the symphony in November 2006 and The Golden Spinning Wheel in March 2008. Both are up to PentaTone’s usual exacting standards, making this an altogether most enjoyable and recommendable release. 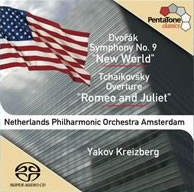 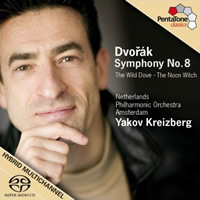