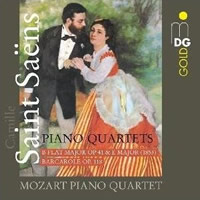 
Quartet Catalogue
The official list of the compositions of Camille Saint-Saëns contains only one piano quartet, but he actually contributed three works to the repertoire of this chamber genre. Apart from the well-known op. 41, this recording by the Mozart Piano Quartet also presents a quartet composed by Saint-Saëns while a student in the middle of the nineteenth century but not published until 1992 and the Barcarolle op. 108, which he set as a piano quartet only the second time around.

Natural Talent
Camille Saint-Saëns revealed his great musical talent while still a young boy; he began composing at the age of seven and was admitted to the Paris Conservatory at thirteen, graduating with distinction in the fields of organ and composition at the age of nineteen. Instrumental music was his great love. He committed himself to this genre as an outstanding pianist and dedicated most of his compositions to it – which initially checked his career because the French public of the time preferred vocal music and German (!) classical composers. The situation first changed in 1870-71, when French national pride led to the founding of the Societé National de Musique, which from then on lent its support to chamber music of French authorship.

Practical Considerations
The first quartet, unpublished during the composer’s lifetime, is structured in the traditional three movements. An extensive first movement is followed by a sumptuous middle part of song character and a light-footed, virtuoso concluding movement. Twenty years later, when Saint-Saëns composed his highly effective op. 41, he drew on developments in German chamber music and wrote four motivically interconnected movements. The Barcarolle op. 108 was composed in 1898 as a quartet for violin, violoncello, harmonium, and piano. Eleven years later Saint-Saëns substituted a viola for the harmonium so that the piece’s former rare instrumentation “would not condemn it to oblivion.”

Rising Stars
The Mozart Piano Quartet rose to the uppermost echelon of the international music world within the shortest time after 2000. This success is hardly surprising since its members are four international soloists as well as the winners and finalists of many international competitions: Paul Rivinius (piano), Mark Gothoni (violin), Hartmut Rohde (viola), and Peter Hörr (violoncello). Their interest in new repertoire makes them a dream match for MDG.

A delightful disc allied to music making entirely at the service of Saint-Saëns and the playing of the Mozart Piano Quartet here is fully Romantic in style, just as their Mozart disc adopted some HIP conventions - it is good to hear chamber groups like this fully tailor their style of playing to serve the repertoire more sensitively than others have done in the past.

Containing three works, only one of which is from Saint-Saëns' youth, this is an attractive offering for all fans of Romantic chamber music and Saint-Saëns. The Mozart Piano Quartet present the largest work first, the Quartet in B flat Op. 41 which has four movements. As is often the case with Saint-Saëns, the tempo markings belie the speed that the musicians (in particular, the pianist) must play to make the music come to life. So it proves in the opening Allegretto and most especially in the following Andante maestoso ma con moto - this is certainly "con moto" and must give pianists pause for reflection before embarking on a performance; Paul Rivinius plays with deceptive ease here and delights the ear. The "scherzo" in all but name is played with a similar joie de vivre and playfulness that is familiar to almost any follower of Saint-Saëns' works. The Allegro finale is certainly spirited and, like many compositions of the era in France, brings the themes of the other movements (all derived from the one idea) together and concludes with a vigorous flourish.

The more juvenile quartet is in three movements, the first of which has a slow introduction that (like Schubert's first symphony) is repeated during the fast section. Like most Saint-Saëns, the melodies flow easily and are pleasing to the ear but it cannot claim to match either the formal sophistication or the beauty of the more mature work. As in the earlier work, the playing is beyond praise and even in the more hackneyed moments, the Mozart Piano Quartet are good enough for the listener to suspend criticism and just sit back (or should that be sit up?) and enjoy. The final Barcarolle, originally for Harmonium but revised by Saint-Saëns for piano, is a delight to the ear in an account like this and makes one very much regret that a further few movements didn't accompany this character piece which surely deserves to be far better known.

The sound is very impressive indeed from MDG and one can clearly locate each of the participants in the aural picture that the 2+2+2 recording paints; this is one case where playing back in 5(.1) sound causes no degradation worth speaking of.

As with all Mozart Piano Quartet recordings heard to date, this is highly recommended.