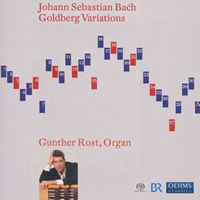 
The Goldberg Variations form the fourth and last part of the “Clavier-Übungen” [keyboard exercises], yet Bach does not explicitly refer to it as “Part IV”. Since Part III had been composed for organ (“Organ Mass“), Bach has chosen the harpsichord for his variation work. Still, Gunther Rost ventures out on the experiment and performs this recording on organ, whereas this is not a “transcription” as he plays the composition colla parte on the organ manuals. A more liberal handling of the use of various instruments plus an increased transparency within the genre of keyboard instruments in the Baroque era definitely adds authenticity to this musical adventure.

Gunther Rost plays the organ at the Church of Saint-Louis-en-l’Île in Paris, which was built by Bernard Aubertin.