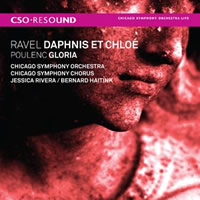 This is an absolutely marvellous SACD!

Bernard Haitink’s Indian summer with the Chicago Symphony Orchestra has here yielded an outstanding account of the score, delivered in superb sound. Although Haitink has made a number of memorable recordings for Philips of Ravel’s music over the past 30 years, including a complete Daphnis et Chloé with the Boston Symphony Orchestra in 1989, this one trumps them all.

With a soft roll on the timpani, muted horns and plucked harps, the magic of this performance is at once established and, thanks to the virtuosic yet sensitive playing of the Chicago Symphony orchestra, Haitink’s refined and imaginative interpretation of Ravel’s greatest orchestral work takes flight. Every aspect of the composer’s fastidious orchestration is crystal clear in this vivid recording. This is particularly true of Ravel’s extensive but delicate use of percussion where detail, that is often lost in many recordings, is in perfect perspective (Track 9 provides a good example of this). Throughout, the choral contributions are superb, no more so than in the unaccompanied introduction to Part 2 of the ballet (Track 14) that eventually leads, via perfectly balanced off-stage brass, to a controlled but thrilling ‘Danse guerrière’. The whole performance is more taut and focussed than in the conductor’s 1989 version, as confirmed by an overall timing of 53.27 (as against 58 minutes in Boston).

The icing on the cake as far as this SACD is concerned is the work that opens the disc; an exhilarating account of Poulenc’s bracing Gloria, a six movement setting for soprano, chorus and orchestra that Poulenc wrote in 1960 towards the end of his life. Haitink’s incisive performance captures both the sacred and profane aspects of this deeply felt piece to perfection. As in the Ravel, the contribution of the Chicago Symphony Chorus is almost beyond praise with their unanimity of attack and clear diction. Jessica Rivera has a lovely voice and her firm and accurate contribution to the third and fifth movements of the work could hardly be bettered.

It is difficult to believe that these performances were recorded live as there is a complete absence of audience noise and no applause at the end of either work. The sound that producer James Mallinson and engineer Christopher Willis has obtained is fairly close but very naturally balanced; it was, however, necessary to increase the volume setting considerably to achieve its full glory. In the multi-channel version the rear speakers provide just the right amount of ambience.