Adrian, it certainly was - but it is now so common for companies to repress as a standard CD without changing the barcode or catalogue number, who knows? I note that JPC also ...

Further to the above, I have now found my copy (!!) and can tell you that the SACD logo is at the bottom of the back outside cover and on the disc label itself. The barcode ...

I wish I liked this performance better, but I have to say I prefer the BIS/Litton Planets disc over this one. 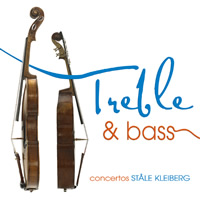 
Marianne Thorsen is widely known for her recording of MOZART violin concertos with TrondheimSolistene. Now she demonstrates what beauty that lies in the Violin Concerto of our classical contemporary composer Ståle Kleiberg. Göran Sjölin brings the sonic qualities of the double bass into new light, and both solo concertos are supported by a widely staged Trondheim Symphony Orchestra in an exceptional surround sound recording.

If we seek a stylistic reference point for Kleiberg's music, it is perhaps not fanciful to refer to its recovery of certain qualities that we associate with northern Europe during the first half of the twentieth century. Composers as different as Sibelius, Nielsen and Vaughan Williams all established unique dialogues with central European and French modernists, but in ways that allowed for a tone of lofty idealism, even at times of frank romanticism that was unavailable to the modernists themselves. Kleiberg seems to continue and to extend dialogues of this kind. He has never been a slave to fashion, but it is striking that the neo-romanticism that is his most natural mode of expression, has once again become a part of our general culture.

I had not previously encountered the music of Ståle Kleiberg, yet in the very first bars of his Violin Concerto I knew I would love his work. A neo-Romantic modernist, he is perhaps best-known for his 'Requiem for the victims of Nazi persecution' (2004) which has had world-wide exposure. Now a professor at the music department of the Norwegian University of Science and Technology in Trondheim (where violin soloist Marianne Thorsen is a also a professor), his style recognisably derives from that of post-war northern European composers such as Sibelius, Vaughan-Williams, Nielsen and Walton. Of course, he has a distinctive voice of his own, which is characterised by scoring with imaginative and innovative colours, deep emotional exploration and an organic approach to structure arising from masterly thematic transformation.

Representing opposite ends of the violin family, Kleiberg's Concerto for Violin (2005) and Double Bass Concerto (1999) are paired on this disc, as amusingly depicted in the Digipak artwork. Accompanying the soloists is the fine Trondheim Symphony Orchestra, one of several prime Norwegian orchestras, directed by Daniel Reuss, well-known for his work with chamber orchestras and choral groups. He is presently Chief Conductor of the celebrated Estonian Philharmonic Chamber Choir, and so has a choral conductor's acute ear for inner balances.

In traditional three movement form, Kleiberg's Violin Concerto greatly benefits from the synergy between violinist Marianne Thorsen and the composer as colleagues. It is hard to imagine a better performance of this piece; her purity of tone, strength and control of line, vibrant expressiveness and formidable technical ability make for a gripping and moving interpretation. She has the full cooperation of the TSO, with fine structural overview and sympathetic balancing of the full orchestra from Reuss.

The organic nature of the first movement seems to intimate a personal journey being experienced by the soloist, from deep contemplation to moods of greater vitality and drive, vividly illustrated by breath-takingly evocative orchestral textures and colours. The second movement is lyrically reflective and Marianne Thorsen is unerring in transmitting her deeply emotional self-communing. Orchestral strings have a rocking background as the violin duets first with the clarinet in low register, then with a plangent oboe, an example of Kleiberg's sensitive scoring. The movement includes the shorter of the concerto's two cadenzas. Thorsen integrates its tricky double-stopping effortlessly into her lyrical flow.

Away from the contemplative nature of the first two movements of the Violin Concerto, its finale embraces raw, often grim humour, mirroring Stravinsky with angular phrasing and asymmetric offbeat rhythms. This movement is fully symphonic in stature, generating much energy and sonic sparks in its wake. It concludes with a long solo cadenza, as free as air and almost extempore in Thorsen's hands; brilliantly expressive and technically flawless in execution.

Recent decades have produced a surprising number of otherwise rather rare concertos for the double bass, by Tubin, Rautavaara and Hallgrimson (the last just premièred) to name a few. As noted in the sleeve booklet, a solo double bass produces less sound than its other string relatives, despite the noise they can make when massed. It was therefore brave of Kleiberg to score the concerto with a full orchestra. He exploits the instrument's usual baritone and tenor ranges, but adds a new dimension by exploring the ability of its long strings to produce purer harmonics than the other family members. Swedish-born bassist Göran Sjölin handles the mechanical difficulties of tone production and relative lack of agility of his instrument very effectively. He, together with the composer, extracts more personality traits from the double bass than we are used to hear.

The first movement opens with baleful swelling heavy brass chords and a sonorous melody on lower strings, which is echoed on the solo bass, paired by bassoons. A majestic 'landscape' climax ensues, which is blown away by a convincing gust from the wind section. Using harmonics, the soloist begins a folk-like tune, to the accompaniment of softly oscillating high harmonics from the violins - a quite extraordinary effect.

The Double Bass Concerto's second movement seems to me a portrayal of a chill landscape, as stark and brooding as any by Sibelius; bird song is present and flocks of birds arise in a flurry from time to time, as the bass intones its harmonics in elemental lines, with a touching fragility of sound. There is an enchanting section of quietly bubbling high string pizzicatos with harp against the soloist's forlorn line as he moves from the harmonics to the normal high register.

For the finale, comedy is the main characteristic, of a droll and whimsical Shostakovich type. The soloist's long tune is more than slightly tipsy as it explores all its registers in conspiring with the flute and bassoon - this could be a portrait of Sir John Falstaff himself. The lengthy cadenza, in contrast, is majestically sonorous, beautifully phrased and powerfully expressed by Göran Sjölin, clearly proud of the noble aspect of his instrument.

Both Kleiberg's concertos evoke thought-provoking imagery in the listener's mind and heart; they are immediately appealing and certainly will elicit much repeated listening in these skilful and deeply committed performances.

2L's 24/96 PCM recordings were made at sessions a year apart (May 2007 & 2008). The most recent (Violin Concerto) has more of the fine reverberation of Olavshallen in Tronheim, with a well-focussed orchestral layout in good perspective. Marianne Thorsen's violin is nicely balanced against the orchestra. The TSO's sound comes over most realistically, with sleek string tone, plangent winds, solid brass, very powerful double bass choir and kettledrums with impressive slam. Surround speakers are very active, almost seeming to pull the orchestra down the sides.

In contrast, the Double bass Concerto seems a touch drier; some of the orchestral departments sound somewhat more closely miked, and the double-bass is given closer attention so the tonal subtleties of its varied playing styles are clearly apparent. This balance, given the relative "shyness" of the bass in its speaking voice, seems very apt, and it captures the orchestral colours and wide dynamic range very satisfactorily.

A fine and very impressive pair of string concertos, authoritatively played by the soloists with rich and powerful support by the Trondheim Symphony Orchestra and conductor Daniel Reuss. Enthusiastically recommended.

I don't have much to add to Geohominid's fine review other than to say that this release is an example of the type of repertoire I'd like to see more of on SACD. What's not to like about this? Solidly tonal compositions in a neo-romantic milieau, this release is a nice antidote to the endless parade of Mahler SACD's. Both works seem to be well played by the participants. The violin concerto makes conventional use of the solo violin by not stretching it beyond its normal limits. Sonically, the solo violin is a bit too prominant in the mix to give a truly realistic perspective but that is my only quibble with it. The double bass concerto makes more adventurous use of the instrument by adding in harmonics. This makes for a very interesting composition with some memorable melodies and instrument effects. The bass does not have a rich-sounding character in its upper registers like a 'cello does but the recording captures its tonality truthfully albeit also a little bit too prominent in the mix.

Other than the prominance of the solo instruments, the recording captures the whole enterprise very well with natural instrumental timbres and dynamics. I've listened to this three times now and expect to return to it in the future. Thanks 2L for a very fine and adventurous release in wonderful sound.

Ståle Kleiberg: "Concertos", a follow on recording to "Treble & Bass", will be released on SACD disc in September. Downloads are available now at Native DSD. Original recording format is 24/352.8 DXD. The album will also be released on Blu Ray disc offering Auro 3D and Dolby ATMOS. I am a huge Kleiberg fan, particularly because of his extensive use of bass instruments in his compositions. This new release is no different. I listened in multi channel surround. Aside from the wide and deep soundstage, I genuinely heard a 3D like presentation. They must have come up with a novel way of using microphones for the recording. Catalog #2L-166-SABD. Marianne Thorsen, violin. Eivind Ringstad, viola. Fredrik Sjölin, cello. Trondheim Symphony Orchestra. Peter Szilvay, conductor.

You are right, Marcus, this follow-on release is once again wonderful stuff, well played by a set of top-rated soloists, proving that that 'old' musical language still is vibrant as ever. I'm preparing a review. 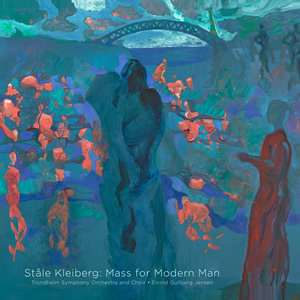