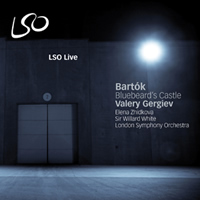 
Bartók’s only opera is an intense drama, involving only two characters and underpinned by a rich orchestral score. Bluebeard’s young bride persuades him to open seven doors in his castle to let the light in. Behind each door she finds increasingly disturbing sights, until the final door opens to reveal the castle’s secret and her fate.

The London Symphony Orchestra made two distinguished recordings of Bartók’s only opera Bluebeard’s Castle in the early 1960’s, one conducted by Antal Dorati and the other by István Kertész; both Hungarian conductors with this music in their blood and an innate understanding of its complex internal structure and the balance between the many contrasting episodes in this psychological drama. For over 40 years these have been, for many, the benchmarks by which new versions of this work are judged.

On this new recording, taken from concerts in the Barbican in January 2009, Valery Gergiev does not appear to bring any special new insights to the score, and despite fine playing by the LSO; I found his performance less than gripping. It sounds for much of the time slightly too cautious, over-controlled and lacks the concinnity of both Dorati and Kertész Even the opening of the fifth door fails to provide the frisson and impact of many of the rival recordings; the brass failing to cut through the orchestral texture enough, although the weight of the organ, as captured by the recording at this point, is certainly imposing. The two soloists are placed to the left and right of the conductor without any excessive spotlighting and though the orchestra did not, in general, appear recessed, some of the details of Bartók’s kaleidoscopic orchestration failed to emerge with quite the clarity and pungency found on other recordings.

Gergiev’s two vocal soloists, however, are most impressive as the protagonists. The veteran Willard White is in very fine voice throughout, giving a noble yet anguished portrayal of Bluebeard. His enunciation of the text is exceptionally clear, though his Hungarian does not sound particularly idiomatic. The Judit is sung by the young Russian mezzo Elena Zhidkova who replaced an indisposed Katarina Dalayman at short notice. A friend of mine who attended one of the concerts from which the recording stems said that her stage presence and total identification with the role was hypnotic, and much of this does come through on this recording. She sounds suitably young as Bluebeard’s new wife and her dramatic singing intensifies with the opening of each successive door. On a couple of occasions she pushes her voice too much, but overall hers is a riveting performance and a major reason to acquire this recording.

The two venerable versions referred to above omit the spoken prologue, but here Willard White declaims it in the English translation by Peter Bartók. The more intimate (and quite creepy sounding) reading by Ivan Fischer in Hungarian on the only other widely available SACD version establishes the oppressive darkness and sinister atmosphere of the opening scene even more effectively than here.

The accompanying booklet includes the full libretto in English and Hungarian and concise but informative notes by Professor Jan Smaczny. While there is much to enjoy on this new recording, in the final analysis it does not quite match the finest of those currently available on CD.