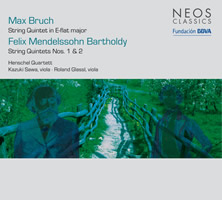 The two Mendelssohn quintets are paired with the world premiere recording of Bruch's recently discovered (2008) quintet.

The Mendelssohn works are overshadowed by his masterpiece, the octet, but both pieces still contain much music to delight the ears of even the most jaded of listeners. In these works, the Henschel quartet are joined by Roland Glassl (of the superb Mandelring Quartet) on viola - it is not specified whether he plays first or second viola. In both works, the recording from 2009 is very revealing and not always flatteringly so - the attack of Christoph Henschel (1st violin) in particular is shown to be a little brutal at times in the faster movements, though it is a characteristic to which one becomes accustomed and doesn't seriously trouble this listener; it may offend the sensibilities of others though so trying before a purchase is recommended. Another aspect that may prove controversial amongst some listeners is Christoph Henschel's use of portamento/audible position shifts at select points. This aspect of performance is not consistently applied and is never over done to my ears - the most frequent and obvious use is in the first movement of the first quintet; it is, at worst, like listening to the Amadeus Quartet in pristine sound - again auditioning before a purchase is recommended. Once those qualifications are borne in mind, the rest of the performances bring a smile to the ear in both the felicities of the allegro's and the refined treatment of the slow movements.

For the Bruch quintet, the Henschel Quartet (who premiered the work incidentally two days after this recording was made) are joined by Kazuki Sawa on viola (again it is not specified who plays which viola part). Here, the music making is recommendable without hesitation. Presented as a pair of movements that progress from a slow "introduction" to an allegro conclusion, this is a work that makes one think anew of Bruch. The performance is wholly recommendable, with the 2008 recording which was set down in a single day (and it sounds that fresh) now not revealing any harsh attacks from any of the players. Here one just enjoys glorious tone in autumnal music - it does, though, point out the relative harsh qualities of the Mendelssohn performances.

All works were recorded in the same location, although in the Bruch a far more pleasing sound is obtained - partly due to the less spritely music, partly due to being recorded with just a smidgen more air. All parts are audible in all performances and there is a pleasing sense of scale.

A note should be made about the presentation itself; on the fold-out cardboard box (with plastic tray), two pages of the facsimile of the Bruch are reproduced which is a lovely touch and makes one realise the care that Bruch took over phrasing and dynamic markings in a way that is not often evident in chamber music.

A qualified recommendation; if you can live with the opening of the two Mendelssohn quintets then this disc will be very enjoyable indeed but equally many will not be prepared to live with such close scrutiny on a repeated basis.