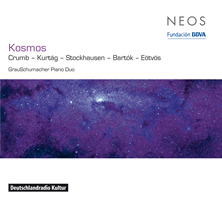 The structure is not the only interesting aspect of this superb recital, for the music has many effects that listeners will not have heard from a piano (or 2 pianos) before. The first two pieces presented are Alpha Centauri and Beta Cygni by Crumb and like Kurtag's Blumen die Menschen..., Spiel mit dem Unendlichen and ...Blumen..auch die Sterne..., they are written for piano 4 hands. Stockhausen's Steinbock-Capricorn and Widder-Aries are surprisingly conventional (at least in the company of Crumb and Kurtag) and have a distinct 2nd Viennese School feeling to their musicality despite being composed in 1975-6.

The Bartok is much more familiar fare and is given a stunning account - although it must be noted, that this music has little to do with the cosmos (either physically or fantastically). The Eotvos is the longest single piece on the disc coming in at 12:31 in this performance (originally written in response to Yuri Gargarin's historic trip into space). This is given in the revised 1999 version rather than the originally published 1961 version (which could be performed on one piano if preferred).

The remaining works are: Waage-Libra & Krebs-Cancer (Stockhausen), Blumen die Menschen..., Sternmusik & Hommage a Soproni (Kurtag), Gamma Draconis & Delta Orionis (Crumb). All of the performances are given compelling and involving performances of works that are not at all approachable (excepting the Bartok).

The sound is very good, made in the studios of Deutschlandradio Kultur, and is very good at reflecting the difference between the use of one and two pianos. In particular, the differing spatial distances between the two pianos in Kosmos and the Bartok and Stockhausen is vividly portrayed.

For those interested in relatively modern piano repertoire, this is highly recommended although it is a shame that (for example) Stockhausen's Tierkries was not completed as there is a playing time of under 58 minutes.