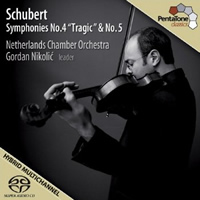 Coming after Mozart: Serenade No. 7 'Haffner' - Nikolic, this is a disappointment.

First, the positives: perfectly paced Allegro's; a wonderful chamber scale performance with some HIP practices such as rasping horns and trumpets; the playing is remarkably well co-ordinated despite not having a conductor (there are a few corners where there is less than perfect unanimity of attack). The sound is much in keeping with the best of PentaTone's house sound - clear and rich.

Sadly in both slow movements, especially in the 5th's Andante con moto, these are played almost elegiacally and without the same sense of freshness that can be heard in other accounts (most winningly for this listener from Abbado & COE). More disappointingly still, is the phrasing adopted by the strings - it is cloying and legato in a way that, even in his worst narcissistic moments, Karajan would have shirked away from. It transforms the music from the cusp of Classicism and Romanticism to Schubert as seen through a Mahlerian veil, only it sounds less respectful than Mahler's transcriptions of some string quartets. When Nott's much larger orchestra (Schubert: Symphonies 2 & 4 - Nott and Schubert: Symphonies 5 & 6 - Nott), that is recorded in a far more resonant acoustic, feel more in tune with Schubert's music than a chamber orchestra, something is seriously amiss.

Have we been listening to the same disk, I wonder. I hesitated buying this disk because of its negative reception. But I do not regret it. Seldom have I heard more inspired performances! These are not the polished-up pieces receiving the lush ‘salon’ treatment one so often hears. On the contrary. Both are ‘rough’ and yet lyrical renditions.

It makes one reconsider Schubert’s symphonic output. In the past, I never very much liked his symphonies. Nice melodies, but on the whole too lightweight. Listen for instance to Norrington’s Schubert 4 with the London Classical players (EMI RBCD). Nothing 'tragic' there.

A member of the Netherlands Chamber Orchestra once said: ‘Gordon Nicolic gives us a free hand’, and I agree that discipline in this recording is not always tops. But what I do hear is the sheer commitment of the orchestra. These are skilled, professional players used to working with, amongst others, the late and painfully missed Yascha Kreizberg (The NKO is part of the Netherlands Philharmonic). Thus ‘a free hand’ does not mean chaos but rather musicians being liberated from too perfectionist conductors. The flow of the music benefits from it and I accept the small ‘accidents de parcours’ as one would do in the concert hall.

Schubert is often misunderstood. His moods are darker than his unique song cycles let you believe. For me, he is not the light hearted ‘sing along’ with his friends in the Vienna taverns. Which, to a certain extent is true, but doesn’t that often hide a feeling of despair? Walter Dahms (Schuster und Loeffler Verlag, Berlin und Leipzig, 1919) notes the shifting moods between despair and resignation in his fourth symphony (clearly the major work on this disk) and concludes: ‘Jenes tiefe Weh ist in ihr, an dem die Besten leiden, jenes Weh, das nicht laute Worte findet, sondern das einsam klagt und aus sichselbst Trost gewinnt.’ (Freely translated something like: all that deeply felt sorrow is in there….not loud words, but gaining consolation through lonesome lament).

And isn’t that exactly what Nicolic brings out in the 4th. In fact, the second movement ‘weeps’. It goes right to your heart. One can feel the tragedy of a tormented adolescent who sought recognition for his symphonic output, but was not able to put his feelings into music in a way his ‘model’ Beethoven was able to do; his musical ‘language’ being too lyrical. Gordon Nicolic brings not only to the fourth, but also to the fifth a sense of drama corresponding to Schubert’s inner self. It would almost seem as if he gets more out of it than Schubert was able to put into it.

I am not saying that there are no better recordings of these two symphonies. But there surely are many that are a whole lot worse. Do give it a try and judge for yourself.

The recorded sound is as usual with Pentatone: First rate!