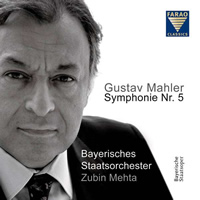 
For many, the evenings featuring Gustav Mahler’s works, which Zubin Mehta conducted back in his time as musical director at the Bavarian State Opera, are an unforgettable memory. Since then, he has regularly been returning to the conductor’s desk of the Bavarian State Orchestra, whose honorary conductor he was appointed after his resignation. On one of those occasions, on December 15th and 16th 2008, another symphony by Mahler was performed: the "Symphony No. 5". The live recording of this concert documents the maestro’s moving reunion with "his" State orchestra, as well as a great moment in music.

"…With a calmness typical of the Viennese, and with the State Orchestra on top form, Mehta strolled through the first two movements, past the apocalypse, avoiding any eccentric straining or overloading of the music. In the scherzo the blissfulness of the waltz was savoured like a dance on a volcano. Mehta manages to let Mahler sound perfectly natural – this is true artistry…" thus the Abendzeitung newspaper.

This work also poses a challenge to both audience and musicians in other respects. "The individual parts" Mahler writes to his good friend Natalie Bauer-Lechner, "are so hard to play that they actually require nothing but soloists. Due to my precise knowledge of orchestra and instruments, some very bold passages and movements happened to slip into the music." Which holds true especially for the solos of course, whose first few measures for the trumpet are just as dreaded as the horn solo in the Scherzo movement, since they both have to be played without the safety net of an orchestra’s grounding.

In this recording the Bavarian State Orchestra shows its technical brilliance and the unique tradition of the tonal quality of Germany’s oldest orchestra.

Since there is no review of this disk on this site, I avail myself of this opportunity to ‘fill the gap’.

Let me say straight away that orchestra and sound are beyond reproach. All the difficulties built into this symphony, requiring soloists rather than rank and file musicians come off splendidly.

The Bavarian State Orchestra is, next to Mariss Jansons’ Bavarian Radio Symphony, a first class orchestra. After having been Music Director of the Bavarian State Opera from 1998 till 2006, Zubin Mehta was named Conductor Laureate of the orchestra and Honorary Member of the Bayerische Staatsoper.

The sound engineers (for all I know from Cybele Records) did their job so well that every single note of this live recording comes through without the slightest problem. And that includes mainly non-obtrusive noises from the audience. Some don’t like this, but I do, as it creates the impression that you, too, are in the hall enjoying a live Mahler fifth without having to take public means of transportation in rain, wind or other ‘caprice’ of the weather maker up there. These noises continue in between the movements, thus avoiding an abrupt end after each movement, followed by total silence, making you wonder if your power amp has died. And yes, there is substantial applause at the end.

On these grounds alone this disk can be safely and warmly recommended.

But what about the rest? What about the music? The ‘rest’ deals with interpretation, focusing on one, single person: the man at the helm. And, as we all know, this is a hazardous path to go. That’s also why I find it difficult to label this or that recording as ‘reference’ or ‘definitive’. In different readings there are different things to admire, to appreciate and to enjoy. Isn’t choice wonderful? It’s the back-bone of a free world. What, if there were only one ‘state approved’ Mahler 5 available. Official reviewers would lose their jobs, since there is no point in commenting. And occasional ones, like me, would have to find something else to muse, nit-pick or rave about.

Zubin Mehta’s credentials as a conductor do not need any further explanation. And as for his Mahler: there are more Mahler disks in his discography than on many other conductors’ achievements lists. Moreover, he is linked with Mahler through Bruno Walter, a friend of Mahler’s, who, together with people like Willem Mengelberg, was a great advocate of Mahler’s compositions, with first-hand knowledge of what he meant. We may, therefore, expect a ‘true’ Mahler reading. Does that make this disk a prime choice? Not necessarily so. But it certainly is one to consider, depending on what personal taste one seeks satisfying.

In this respect one should be aware that Mehta is not Bernstein. As an interpreter I find that Mehta tries more to stick to what Mahler meant than the more dramatic, and if need be even ‘vulgar’, approach from Bernstein, who had a -much liked- tendency to ‘emotionalize’ the score. That is the charm of ‘interpreting’. There is room for personal appreciation. And we, ordinary listeners, can and are free to choose whatever we like best. No definitive, no reference.

(In an interview Mehta said this about Bernstein: “I invited him twice to my performances, so that I could talk to him. So he came to the Symphony No. 5 and didn’t like it too much, so we sat and we talked. And he said, what you are doing is trying to make it more beautiful than it is. If Mahler becomes vulgar, in other words when he brings the street music in, don’t be afraid, play it as street music. Don’t try to cover it and make it more beautiful”.)

As I said, Mehta does not venture into more drama than strictly necessary in the context of the music. I find his approach faithful, observing markings and so on. But he has also gone a step further, studying notes left by those who knew Mahler well, like those(almost overwhelming number) left behind in the scores used by Mengelberg.

The first movement may, indeed, not be as emotional as some would have wished, but the result is not less impressive, leaning here and there against modest ‘vulgarity’. But to me that simply isn’t his style. Similarly, the ‘vehemence’ in the second movement is a storm ‘under control’. Very well shaped, but in order to get some of the real blow I would advise you to turn up the volume (I have no close neighbours!). However, the end of this movement is simply sublime.

At the start of the third movement, which is a ‘Ländler’(a typical German dance), Mehta could have stood back. These musicians know probably better than most conductors how to play it (it’s in their blood, so to speak), But as the movement develops, the structure becomes more and more complex. In fact, so much more that it is to my mind a touch stone to differentiate between the good and the mediocre. Mehta is here at his best.

The most controversial part is the adagietto. It has now become one of the top-pop classical tunes. Some, and notably Leonard Bernstein, have chosen it as their farewell from life. I think that Mahler’s idea is rather the opposite. It should not be seen as being in the same league as, for instance, the final movement of Tchaikovsky’s ‘Pathetique’ symphony. There is clear evidence that we deal here with ‘a love letter to Alma Schindler’, his future wife. The mood, therefore, should be a positive one, combining tenderness and passion. And that is what Mehta does.

Another problem is the speed. Mahler apparently took 7 minutes, in spite of his marking: ‘Sehr langsam’ (very slow). Some observe this marking in the score literally and take up to 12 minutes. Mehta keeps on the safe side with 10 minutes. (For comparison: Haenchen/Netherlands Philharmonic/Pentatone/SACD takes 8:54 and Bernstein/VPO/DGG/DVD 12:03). As far as public at large is concerned: the slower the better, so it seems to me.

The final movement, the Rondo Finale, sounds and sings as it should.

My conclusion: Unless you are firmly against applause at the end, Mehta’s reading can positively compete with the best and is certainly worth considering taking into account the superb sound. 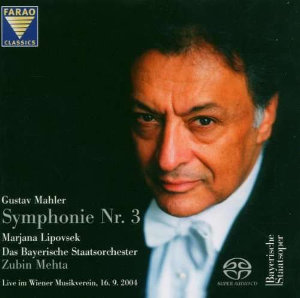 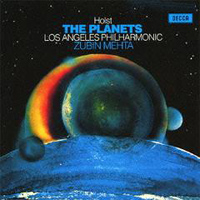 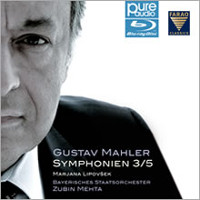