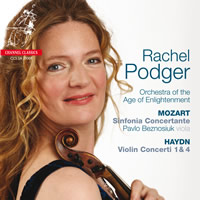 
It was a joy and an honour to record Mozart's Sinfonia Concertante – such a beautifully crafted masterpiece with those memorable, elegant and distinctive themes in the first movement and both soloists weaving in and out of symphonic textures, the remarkable poignancy of the second movement with its dramatic dialogue which is then dispersed by sheer delight and comic playfulness in the Presto.

Delving into these moods was personally enriching and helped me gain a little bit more insight into Mozart's genius and being. Pavlo and I had the extreme good fortune to play a Strad each! Generously loaned to us by the Royal Academy of Music for this project, we savoured every minute of having these esteemed and valuable instruments in our hands! 'Mine' is a proud instrument which demands careful negotiation and warming before it will expose it's beautiful colours. An amazing experience in itself to play an instrument like this, it was even more of an event when the two Strads met and 'spoke' to each other with a feeling of being acquainted, perhaps not for the first time...

The Haydn works date from the mid 1760s when the composer was in the service of the Esterházy family. The Concerto in C major was certainly written for Luigi Tomasini the concertmaster of the court orchestra and a composer in his own right. It is probable that the other concerto in G major was too, as Haydn was greatly impressed by the style and virtuosity of Tomasini’s playing and wrote a total of four violin concertos during this period.

Both concertos have only string accompaniment, here provided by the Orchestra of the Age of Enlightenment, and a discreet harpsichord (the player’s name unaccountably omitted from the list of the orchestra personnel in the accompanying booklet). Rachel Podger has chosen to play both concertos on her own Pesarinius violin (1739) that she feels is most suited to the style of these works and few would disagree with her choice. Her agile and spirited playing in the outer movements is complemented by her pure cantilena in the slow movements. As is to be expected, both works are full of baroque idioms and, while neither presents Haydn at his most inventive, they make an enjoyable pairing. The C major concerto is the more interesting of the two with a beautiful slow movement in which Podger’s rapt playing over pizzicato strings is a pleasure to hear.

For the Mozart Sinfonia Concertante, Podger and her partner, the excellent viola player Pavlo Beznosiuk, each use Stradivari instruments both of which are gut strung and played with Classical-style bows.
The opening orchestral tutti sounded somewhat stodgy with little character or individuality from the wind players of the OAE and heaviness to the sound that was not present in the Haydn works. The ornamentation applied by the soloists in this opening movement (violin at 5’40”and viola at 6’15”), though tasteful and apt, did tend to impede the flow of the movement. However, both the exchanges of melodic line between Podger and Beznosiuk in the slow movement and the blending of their two wonderful instruments in the cadenzas are quite ravishing. In spite of the fine playing of the two soloists and the period style of the performance this would not necessarily be a first choice among the many recordings of this work, but it is well worth investigating.

The recording is slightly problematic. It has been transferred at a colossally high level that makes finding a suitable volume setting difficult. Even when this has been achieved satisfactorily, an excess of low frequency energy emerges from the speakers in the Mozart, so that every entry of Chi-chi Nwanoku’s double bass sounded as if the full double bass section of the Berlin Philharmonic Orchestra had joined her. How much of this is due to the acoustic of the recording location, All Saints’ Vicarage, East Finchley, London, I would not care to speculate,but it does not afflict the Haydn concertos that were recorded at an earlier date.

A qualified recommendation is warranted as I accept that what I encountered may be system dependent.