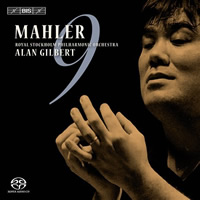 Mahler: Symphony No. 9 in D major


The love affair between Alan Gilbert and the Royal Stockholm Philharmonic Orchestra began in December 1997 with a performance of Mahler’s First Symphony. In 2000 Gilbert became chief conductor and artistic advisor of the orchestra, remaining in that post until 2008 – a period which has been described as ‘a golden age’ in the history of the orchestra.

For his farewell concert as chief conductor, Gilbert chose to close the chapter by performing Mahler’s last symphony, No. 9 in D major, and the present recording was made in conjunction with this very special occasion. It was a fitting choice of repertoire in another respect as well: Mahler composed his Ninth in 1909-10, after having accepted the post of music director of the New York Philharmonic, the very orchestra that Gilbert now goes on to take charge of. The symphony is often regarded as the composer’s monumental – both in terms of scale and emotional scope – leave-taking of the world.

In his insightful liner notes, Arnold Whittall acknowledges the difficult circumstances in Mahler’s personal life at the time of composition, but rather than nostalgia he finds in it a momentum propelling the symphonic genre far into the future: ‘Mahler’s Ninth is one of the crowning glories of symphonic history, and many would argue that it has only rarely been equalled, and probably never surpassed, in the century since its completion.’

This superb SACD was recorded in June, 2008 as Alan Gilbert was bidding adieux to the Royal Stockholm Philharmonic as their chief conductor. It's my first exposure to Maestro Gilbert on recordings though I have recently heard some of his work with his new home the New York Philharmonic on radio broadcasts. On the evidence of this Mahler 9th, I am drawn to conclude that those final Stockholm concerts must have been triumphant and that New York has much to look forward to with this young conductor.

Since Leonard Benstein's single-handed revival of the symphonies in the 60's and 70's, Mahler's star has been continually on the rise for audiences both live and at home via recordings. So much so that the SACD shelves (and RBCD shelves for that matter) are glutted with Mahler releases - we are spoiled for choice! So, what does Gilbert add to this already burgeoning pantheon? Well, his is a well-organized and effective rendering that leaves me yearning for the notes to continue even as they fade away at the end of the fourth movement Adagio. With a timing of 82:22 minutes (on a single hybrid SACD from BIS) his account is on the fleet side (Chailly and Tilson-Thomas come in at 89+ minutes, Abbado and Sinopoli at just under 80). But, in a work as expansive as this, timings really don't tell you much (if anything) since the opportunities for "interpretation" run rampart in a Mahler symphony. Gilbert does not seem at all rushed despite the timing and he wrings plenty of emotion from the score while managing the multitude of dynamic contrasts extremely well - just listen to how he builds the canvas of the first movement from the halting beginnings through the initial waltz theme to the climax at 3 minutes in. Wonderful stuff. The orchestra plays magnificently too.

Sonically, this is excellent. It is difficult to capture a large orchestra successfully but BIS has managed to do it here. There is not too much hall in the stereo mix which appeals to me because it provides that much more clarity to the orchestral sections. Everything sounds natural and present but I would have liked to have a bit more low-end bloom and extension.

If ever a composer wrote with his heart on his sleeve, it is Gustav Mahler. In his final trilogy of orchestral works he turned from contemplation of great themes such as love, death and resurrection to more personal introspection about his serious heart condition and the infidelities of his wife Alma. Yet, as Arnold Whittall reminds us in his perceptive booklet notes for BIS, he remained positive about his new career with the New York Philharmonic and threw himself into work with his love of life unquenched.

It is a feature of great music that it can simultaneously express the greatest darkness of the soul and yet still exult in affirmation. In doing so it offers great challenges and wonderful opportunities for its interpreters. No two performances of the Ninth Symphony can ever be the same. Structurally, it is progressive, with unprecedented variation of relatively few melodic elements; it begins and ends with slow movements and harmonically it looks forward in its inner movements to the dissonance and chaos of the unfinished Tenth Symphony. As with the other symphonies, it harks back to earlier works (for example the Wunderhorn components of the inner movements), so that one could view Mahler's whole cycle as one giant symphonic journey.

Playing times mean rather little for such an expansive work, but the first thing to note is that Gilbert takes over three minutes off the 'usual' times for the first movement, allowing BIS to fit the whole symphony on a single SACD at 82'22. He is attentive to Mahler's extensive (and almost obsessive) markings, such as "somewhat clumsy and very coarse", "passionately", "with utmost force", "with rage", "without feeling", "without emotion", "shadowy", "very insolent" and "imperceptibly". Clearly this is a demanding score for the Royal Stockholm Philharmonic Orchestra, which certainly rises to the occasion, and Gilbert himself shows firm leadership. However, side by side comparison with Tilson Thomas (Mahler: Symphony No. 9 - Tilson Thomas) made me much prefer the SFO's superb long-breathed cantilenas and more subtly layered textures. Tilson Thomas also drew me much more deeply into his performance, tugging the heart strings, particularly in the long-breathed final bars, full of profound peace and tonal richness despite their poised withdrawal. The SFO play with the passion demanded by the composer, the level of which just eludes the RSPO, particularly for the upper strings with their less lustrous sound.

The difference between these two performances is also marked by their internal balancing, for which conductor, orchestra and recording staff are jointly responsible. BIS give the RSPO a relatively closely-observed mix, in which the Stockholm Concert Hall acoustic (even in multichannel) is only just apparent. The hall evidently does little to favour the lower end of the spectrum, which Mahler has reinforced with bass clarinet, double bassoon, tuba, tam-tam and bass drum. Extended bass is certainly there, but turn to Tilson Thomas and immediately there is a richly sonorous and viscerally exciting bass foundation for the orchestra in the San Francisco hall. This adds greatly to the opulent and decadent Viennese sound Mahler was seeking, and boosts the drama and dynamic range of the performance.

The BIS recording also is quite restricted in portraying perspective depth in the orchestra, so that wind solos seem to occupy much the same space as the strings. Soft solo violin and viola parts are caught in the headlights, as it were, whereas in San Francisco they emerge from the orchestra with magical effect. BIS certainly have given Gilbert an extremely detailed orchestral sound, but for me this was at the expense of the overall tonal canvas and its textural subtleties so carefully prescribed by Mahler.

Mahlerians will want to hear Gilbert's well-recorded view of Mahler's Ninth Symphony; it is concise, committed and beautifully executed - very much an interpretation for the 21st Century. But for me it is a great Mahler 9 still in the making. 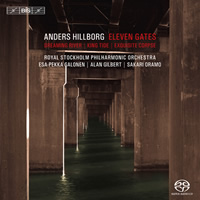