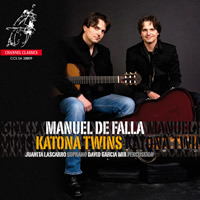 
Works of Manuel de Falla - widely regarded as the most distinguished Spanish composer of the early twentieth century - are strongly influenced by Spanish folk music in which the guitar is central. Although he composed only one piece for that instrument his inspiration was flamenco and early Spanish music, including the guitar works of Gaspar Sanz. The guitar also features in Falla‘s first great success, the opera ‘La Vida Breve’. For this recording, we have selected and transcribed works in which the influence of the guitar was dominant thus translating these pieces back to their original source of inspiration. We felt that adding percussion would enhance the rhythmic element that is most characteristic for the music of Spain. We hope that showing De Falla’s work in this dynamic light will bring new audiences to his brilliant music.