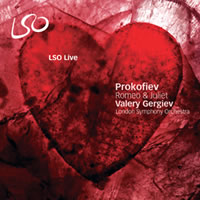 
Prokofiev’s Romeo and Juliet has a strong claim to being the greatest ballet. Not only does it contain much of the composer’s finest and most instantly appealing music, it is also considered one of the most exceptional musical realisations of Shakespeare.

Valery Gergiev has always had a particularly close affinity with the music of Prokofiev, as his many fine performances and recordings of the composer’s works testify. The latter includes outstanding versions of the operas The Love for Three Oranges, Semyon Kotko and War and Peace, the five Piano Concertos with Alexander Toradze and the seven Symphonies with the LSO on Philips, a set that it to be hoped will one day be re-released in SACD on the LSO Live Label.

This is Gergiev’s second complete recording of Prokofiev’s Romeo and Juliet. The first, made with his Mariinsky Orchestra some twenty years ago, again for Philips, still sounds well though the performance and orchestral playing on that version are at times less than riveting. However, the frisson created by this new live recording, thanks in no small part to the supremely confident and committed playing of the LSO combined with the conductor’s more refined interpretation of the music, makes these new SACDs unmissable.

Gergiev’s overall conception of the score has not changed much over the years. It is essentially fast moving and vividly dramatic, though conversely often more lyrical and less hard driven, than say Lorin Maazel’s incisive 1978 recording with the Cleveland Orchestra on Decca (RBCD). The total timing of this new version (138’58”) has shaved about five minutes off Gergiev’s earlier set to the undoubted advantage of the performance. The lively dances race along with tremendous élan while the impact of Prokofiev’s achingly tender and searingly tragic passages, such as many of those found in much of Act 3 of the ballet, are moulded with breathtaking sensitivity. Gergiev’s decision to bring the full score to audiences in the concert hall as well as the theatre is totally vindicated by the sharp focus of this performance; never for a moment are there any longueurs in his unfolding of the drama, via Prokofiev’s miraculous orchestral writing.

The sound quality of the 5.1 channel DSD recording is amongst the best that this label has given us. Prokofiev’s idiosyncratic and vibrant orchestration seems much better suited to the clear Barbican acoustic than that of many other composers. The pungent woodwind, sparkling percussion and Prokofiev’s frequent use of the bass drum and weighty lower brass all are vividly reproduced with realistic impact.