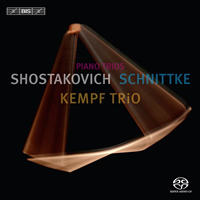 
The highly emotionally charged works on this disc were all three composed during periods of emotional upheaval in the lives of their creators. Shostakovich's father died in the aftermath of the turbulent years of the revolution, and a year later, in 1923, he himself was diagnosed with tuberculosis. Sent to Crimea to recuperate, the sixteen-year old music student fell in love with the daughter of a Moscow professor, and began to compose his First Piano Trio, a passionate work representing a vital stage in his development towards the First Symphony.

Twenty-one years later, in the midst of the 2nd World War, Shostakovich completed his Piano Trio No.2. This extraordinarily painful work, was born out of the appalling sufferings of his fellow-countrymen, but also reflects the loss of his closest friend, the writer Ivan Sollertinsky, who died unexpectedly while Shostakovich was working on the trio.

Also marked by a close encounter with death, Schnittke's only Piano Trio originated as a string trio. Composing it to mark the centenary of Alban Berg in 1985, Schnittke 'avoided his trademark stylistic confrontations and direct quotations, preferring subtle allusions to the world of the Viennese classics, especially Schubert', to quote David Fanning's informative liner notes. Soon after completing the trio, Schnittke suffered the first of a series of massive strokes, but in 1992 he revisited the work, dedicating the version for piano trio to his doctor, Alexander Potapov, 'who saved my life twice'.

On a previous disc, the Kempf Trio has released two other Russian piano trios - by Tchaikovsky and Rachmaninov - in performances described as 'fiery, cogent, intelligent and wholly compelling' (Evening Standard) and 'a triumph' (The Strad). In the present, no less impassioned and passionate programme, we hear the swan song of this fine ensemble, which was recently dissolved.

Recorded in April 2004 at Nybrokajen 11 (the former Academy of Music), Stockholm, Sweden

Why this wonderful recording sat "in the can" for 5+ years is a mystery to me. Recorded in April, 2004, the Kempf trio achieve the same excellence they have demonstrated in their two prior BIS trio releases (von Beethoven trios on BIS SACD and Rach/Tchaik trios on BIS RBCD). Of the members here, Freddy Kempf has the most name recognition due to his solo recordings for BIS, many of which have drawn critical acclaim. But the two string players, violinist Pierre Bernsais and cellist Alexander Chaushian, are fully the equal of Kempf's talents. It is a pity that they parted ways some years ago now. I place my vote now for these players to re-unite.

The two Shostakovich trios are by far the more familiar works here, with the second trio being regarded as a masterpiece in the genre. The second trio recieves a very sympathetic performance and conveys the composers angst quite effectively. The finale would have benefitted from a touch more dynamics (from the players, not the recording) but it is certainly a valid interpretation of the music. This one joins E. Leonskaja with members of the Borodin Quartet (on RBCD) as a paragon of this piece. The first DSCH trio was a youthful work that is not as frequently recorded. The Kempf trio make a great case for this smaller, less intense work.

Alfred Schnittke's Piano Trio (1992) is an arrangement of his String Trio (1985). It is not easy listening. I know the string trio from the earlier BIS RBCD 547 (members of the Tale quartet) and the Piano Trio from BIS RBCD 697. I think the piano trio arrangement of this piece is the more effective due to the fuller tonality provided by the piano. It is comprised of two slow movements in a highly chromatic idiom bordering on atonality at times. The mood is mostly somber and the performance from the Kempf Trio reflects that mood effectively. There is something about Schnittke's music that draws me like a moth to flame despite its inherent difficulties. This SACD would be a good way for one to dip their toe in the Schnittke waters.

Sonically, this is a very good recording (I listen to the stereo tracks). All three instruments are well blended but distinct in a small hall acoustic that never gets in the way of the detail. I would have appreciated a bit more low end bloom for the cello and low end of the piano. Otherwise, another excellent BIS SACD recording. Highly recommended. 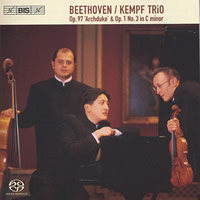