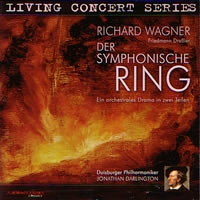 Recordings of so-called “bleeding chunks” from Wagner operas have appeared with great regularity almost since the works were composed. However, some conductors, such as Leopold Stokowski, moved away from performing just orchestral highlights, to the creation of what, in his case, he called ‘Symphonic Syntheses’. These attempted to bring the music of the operas to the concert-going public, not through a suite, but via a more coherent and extended presentation encompassing some of the most memorable sections of these works. In more recent times other conductors have adopted this idea, most notably Lorin Maazel with his ‘Ring without Words’ that he recorded with the Berlin Philharmonic Orchestra for Telarc some 20 years ago. Last year this concept reached SACD with Neeme Järvi’s splendid disc entitled ‘The Ring - an Orchestral Adventure’ Wagner: The Ring - An Orchestral Adventure - Järvi the work of the Dutch composer Henk de Vlieger that seamlessly linked the four parts of the tetralogy into an unbroken sequence lasting an hour.

This very impressive recording in Acousence’s ‘Living Concert Series’ entitled ‘The Symphonic Ring – an orchestral Drama in two parts’ takes the idea even further, with a 93-minute sequence of the four parts of the Ring accommodated on one single layer 2-channel SACD. The arrangement performed here is the work of Friedmann Dressler who is a cellist in the Duisburger Philharmoniker and also a long time member of the Bayreuth Festival Orchestra, so he knows his Wagner rather well. Part 1 (40’. 10”) uses the music of Das Rheingold and Die Walküre and Part 2 (52’. 40”) that of Siegfried and Götterdämmerung; thus the complete work occupies the length of a normal symphony concert. This live recording was made at such a concert on 27 and 28 of May 2009 in the Mercatorhalle, Duisburg.

The problems for the arranger are manifold: what to keep in and what to leave out, how to retain a convincing narrative through the music and handle sections where there would be a prominent vocal line present etc.
By and large Friedmann has succeeded brilliantly in overcoming these problems, though Part 2 is more successful than Part 1 due to the inclusion of much more of the familiar concert excerpts such as, from Siegfried, ‘Forest Murmurs’, and from ‘Götterdämmerung’ ‘ Dawn and Siegfried’s Rhine Journey’, ‘Siegfried’s Funeral Music’ and ‘Brünnhilde’s Immolation’. Another excellent idea in the second part was to include the Preludes to both Acts 2 and 3 of Siegfried as they rarely appear outside the opera.

Part 1 opens, as one might expect, in the depths of the Rhine and then moves almost too rapidly through the drama to the timpani roll following Donner’s thunderclap. This same timpani roll plunges us straight into the abating of the storm that opens Die Walküre – a rather jarring effect. Vocal lines are effectively assigned, for example Sieglinde is given to the oboe and the beautiful melody of ‘Winterstürme’ to the cellos.

The Duisburger Phlharmoniker is one of the oldest German orchestras and possesses all the finest characteristics of such bodies. All 105 players give an excellent account of themselves (the rich sounding brass section is especially impressive) under their music director, the British conductor, Jonathan Darlington. Darlington’s tempi are spacious but not laboured and this recording can be considered as complimenting the Järvi disc mentioned above rather than an alternative to it.

The technical quality of the Acousence recording is superb, realistically capturing the orchestra in the clean, if slightly dry, acoustic of the hall. The stereo spread is wide, but lacks a little depth. Audience noise is virtually non-existent with just the trace of an occasional discreet cough to alert one to their presence. The spectacular anvils in ‘Das Rheingold’ certainly rival those on Solti’s famous recording of the opera. Further details of the technical aspects of the recording as well as the opportunity to hear the whole thing for yourself can be found at http://www.acousence.de.

Definitely recommended to all who love the Master of Bayreuth’s orchestral sound world, but please remember this is NOT a hybrid SACD nor multi-channel.