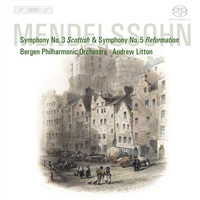 
Celebrating the 200th anniversary of Felix Mendelssohn's birth in 1809, Bergen Philharmonic Orchestra and their music director Andrew Litton have recorded a three-disc survey of the composer's symphonies. This final disc in the series opens with the 'Scottish' Symphony (No.3), conceived during the composer's visit to what was at the time regarded as the Romantic retreat par excellence, celebrated in literature as the retreat of solitary heroes amid the rugged Highland scenery.

From Edinburgh Mendelssohn wrote to his parents: 'At dusk we went today to the palace where Mary Stuart lived and loved. Everything there lies rotten and in ruins; the clear daylight shines right in. I think that today I found the beginning of my Scottish Symphony.' It would take him many years to complete what was begun that day in 1829, however, for the symphony was not ready until 1842 - actually more than 12 years after the 'Reformation' Symphony, even though this carries a higher opus number. The reason for this confusing state of affairs is that Mendelssohn was less than happy with the work he wrote for the 1830 celebrations of the Lutheran Reformation, and therefore refused to let it be published in his lifetime.

Both works contain references to their stated subjects - the Scottish-sounding 'folk tune' in the finale of the Third Symphony, the use of Luther's chorale 'Ein' feste Burg' in that of the Fifth - but they also share the musical lightness of touch and the inventiveness that have made Mendelssohn a favourite with concert audiences for close to two centuries. These qualities are mirrored in the performances of Litton and the Bergen PO, whose recording of Symphony No.2, 'Lobgesang', earlier this year was described in a review in Financial Times as 'suitably glowing', with its emphasis 'on mercurial invention and spontaneity'.

This record has received support from the Grieg Foundation.
Works (2)

These are good, middle-of-the-road performances from Litton, consistent with the earlier release of Syms 1 and 4 (I don't like Mendelssohn's 2nd symphony so I don't plan on buying that one). I am not a huge fan of maestro Litton's conducting and this clearly biases my thoughts on this SACD. I just keep thinking that there is more in the notes than what is presented here.

The conventional numbering of Mendelssohn's symphonies does not reflect the actual order of composition: 1,5,4,2,3. Though Sym 5 is given opus number 107, it was written in 1829-1830, a good 11 years prior to Sym 3 (although the sketches for 3 began shortly after 5, he didn't complete it until 1842). I always get a thrill when I hear the famous Luther hymn Ein' feste Burg ist unser Gott (A Might Fortress is our God) emerge in the last movement of Sym 5. Litton and orchestra convey the music with sufficient conviction but lacking the ultimate in excitement. With standard repertoire like this, the competition is fierce (if one includes the multitude of RBCD's over the years: Arkivmusic lists 46 recordings of Sym 5 and 75 of Sym 3). On SACD, there is the RCA/Munch of No.5 and the Linn/Swenson of No.3 though I've not heard either of these. Sym 3 has the same attributes in this performance - decent but not great in any way.

Sonically, two different recording engineers are used for the two symphonies (both being different from the engineer used for the Syms 1 & 4 SACD) though the results are very consistent if unspectacular. The sound is somewhat homogenized and blended with a decent mix of direct and ambient sound in the stereo mix. The sound lacks the ultimate in low end bloom and authority and the brass lack bite. A tepid recommendation at best. 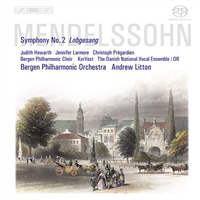 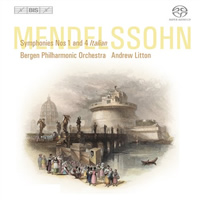