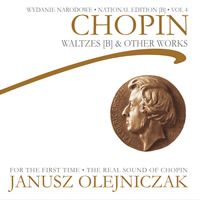 Chopin was quite selective about the works which he decided to publish. He also caused much confusion for posterity by handing variant MSS to different publishing houses. If (like me) a pianist has had the same Edition for some time, it be disconcerting to hear a different version in recital or recording. The ongoing Polish National Edition (PNE) is issuing volumes of all Chopin's extant works in critical editions based on the authenticated autographs. It also documents those variants, which Chopin considered to have equal status. The published Chopin Waltzes (Op. 18, Op.34, 1-3, Op. 42, Op. 64, 1-3) have already been issued in Series A of the PNE, and were duly recorded on RBCD by BeArTon with Wojciech Switala as the pianist.

After Chopin's death a number of other MSS came to light, many of which were published by Fontana as posthumous works. He gave them spurious opus numbers following on from Chopin's, prompting the mistaken idea that these were all late works of the composer. Series B of the PNE is the critical edition of these works unpublished by Chopin himself. The present SACD of Waltzes contains 12 'posthumous' items, 9 of which are already very well-known by pianists. They have been given WN numbers (Wydanie Narodawe = National Edition) in chronological order, with the first five being from Chopin's Warsaw period, the remaining four being written in Paris. All of these unpublished waltzes were classed by Chopin as 'social' pieces, being used for intimate salon performance, while many of his published group were regarded as 'concert' waltzes, with much glittering display. The unpublished set are uniformly simpler than their published companions, Chopin having lavished some pre-publication polishing on those. They nevertheless are very typical of Chopin's style, sometimes gently wistful and always posing challenges for pianists to capture and express their charm and poetry.

Despite their popularity with pianists, collections of Chopin's waltzes lag somewhat behind his other works in number of recordings. Their foremost interpreters have been Lipatti, Rubenstein and Vasary; latterly Imogen Flyter and Alexandre Tharaud have produced outstanding complete sets, although not stating which editions they used. Janusz Olejniczak has been assigned as player for BeArTon's recordings of the PNE Series B volumes, which are in SACD format. He is perhaps best known as the behind-the-scenes pianist of Roman Polanski's film 'The Pianist'. His performance of these waltzes, with consummate technical control and flexible rubato, is fully in the line of his splendid predecessors; there is much to delight the ear, particularly for those of us who learned the waltzes during our youthful piano studies.

For comparing and contrasting the published and unpublished waltzes, Olejniczak also performs three of the former; Op. 34. no.2 in A minor, with its sonorous left-hand melody, Op. 64 No.1 - a whirling moto perpetuo and Op. 64 No.2 in C# minor, perhaps the archetypal Chopin waltz.

Finishing this delectable disc is the first version of the C# minor Impromptu which was later published as 'Fantasie-Impromptu' (now WN46) and the solo piano version of the Andante spianato & Grande Polonaise, which was probably performed with an orchestral accompaniment by Chopin in Paris.

BearTon's capture of the piano, presumably a Steinway, set in the gentle ambient atmosphere of Polish Radio's Concert Studio, has discreet support from the surround speakers in MC and sounds realistically balanced from a 'front stalls' sort of position. The microphones are not too close, so no mechanical noise from the piano is apparent at normal listening levels. There are extensive and informative notes about the music and an outline of the aims of the PNE.

Apart from its scholarly origins, this disc provides a most enjoyable recital, played by a sympathetic and imaginative Chopin expert from impeccable texts. Highly recommended.