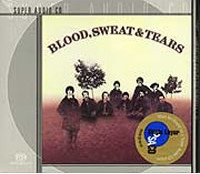 
With the 1969 release of their self-titled second album, Blood, Sweat & Tears - now with lead vocalist David Clayton-Thomas - catapulted onto the charts with their smash hits, "You've Made Me So Very Happy," "And When I Die" and the anthemic "Spinning Wheel."

Blending their many diverse styles into an altogether new pop sound, the record established Blood, Sweat & Tears as one of the most dynamic bands of their time. In 1970 the band won the Grammy Award for Album of the Year.