I waded around this impressive tureen of alphabet soup, but I emerged from it still unclear whether the size of the extracted file is fishy. 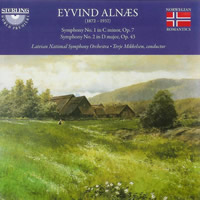 Never heard of Eyvind Alnæs (1872-1932)? You are not alone. Bo Hyttner's Sterling Records company specialises in releasing previously unrecorded music of the Romantic Era from Scandinavia, and here are première recordings from one of Grieg's contemporaries.

Excellent and extensive biographical notes by Audun Jonassen detail the struggle which a budding composer contended with in trying to develop his craft in a country which, at the time, was on the very outskirts of mainstream European cultural development. Alnæs was fortunate in coming from a musical family, and he began writing music at an early age, later studying organ and piano in Kristiania (now Oslo). He had encouragement from Iver Holter, Edvard Grieg and Christian Sinding on the basis of some early compositions, and pursued his studies (as had Grieg before him) in Leipzig. He returned to Norway and settled as an organist in Drammen, not far south-west of Oslo. The following four years saw publication of four of his largest-scale works, including the Symphony in C minor Op. 7 (1897-98). It was played in Leipzig and Oslo, receiving public and critical acclaim.

The C minor symphony uses quite a large orchestra, and is structured in the standard four movements, with a slow second movement and a third movement which is a scherzo in all but name. The tempo designation "Allegro patetico" of the first movement is to be understood as being derived from 'pathos', in the same vein as Tchaikovsky's Pathétique Symphony, written only a few years earlier, and which clearly had some influence on Alnæs' work, as does the Russian composer's Fourth Symphony. Alnæs' themes are memorable, his orchestration colourful and resourceful, and his narrative arc convincing. The true heart of this symphony is its slow movement, rightly said to be the best ever written by a Norwegian. Alnæs' honest character, full of human warmth, comes to the fore here, with a movement of considerable depth of feeling and nobility. The following good-humoured Allegro movement is an excellent foil, with many allusions to folk tunes, and it, like the finale, bears the obvious influence of Schumann. The finale itself is a large-scale march, which finally usurps the C minor key to arrive jubilantly in C major. Despite its sometimes obvious emulations of other composers styles, this symphony holds the attention with its easy-flowing tunefulness and colourful orchestral detail.

Most of Alnæs output was in small-scale forms such as piano and choral music. His Second Symphony in D, Op. 43 finally arrived in 1923 and was his last major work. Its first movement catapults us away with an energetic and leaping stream of melody which is purely balletic - easily a worthy successor of some of Tchaikovsky's best ballet music. There are some more delicate colouristic orchestrations here - note the section with high flutes and glockenspiel over deep basses - like a frosty winter's night. This is a captivating movement with a joyous paean to round it off. The slow movement, in contrast, marked "quasi una marcia funèbre", begins solemnly on resinous cellos with a burdened tread, taken up by oboes, then violins until it melts into a second subject of aching poignancy. The grief-laden trio seems to fragment with emotion until a slowly growing climax, aided by swirling harps, leads to a massive re-statement of the funeral march by the full brass above a writhing wave-like figuration from strings; this fades slowly until the movement dies in silence. A most memorable exposition of the orchestral funeral march genre, which was made famous by Beethoven's in the Eroica.

The Second Symphony's Scherzo takes wing with a chattering of flutes and violins as if in a breezy countryside dappled by sunshine; its Trio sports a gorgeous sweeping string melody over tugging brass ostinati, fit to melt anyone's heart, until the return of the Scherzo theme sweeps it aside, with wonderful comic interplay across the sound stage from all the wind instruments. We stay in the countryside for the Finale, which tricks the listener with a dramatic and suspenseful opening that resolves itself into a medley of imitation 'halling' Norwegian fiddle dances on the upper strings. These are picked up and whirled gaily around by the rest of the orchestra, rewarding us with a brilliant conclusion.

For me, all erudite criticisms of Alnæs about stylistic borrowing, structural inadequacies, old-fashioned orchestral textures and lack of a unique voice are easily swept aside; his music just works and gives great pleasure. Its effect lies in his innate lyrical nature, colourful orchestration and the sheer directness and uncomplicated appeal of his music. No-one will say that Alnæs was a neglected genius, but these two symphonies have certainly given me enormous pleasure, and I shall be happy to return to them time and time again.

I confess to not having encountered the Latvian National Symphony Orchestra before, but they are a fine-sounding orchestra, and clearly delight in their outing with Alnæs, spurred on by perceptive and enthusiastic espousal by Terje Mikkelsen. I cannot think that these symphonies could be played with greater affection and skill. The LNSO woodwind, in particular, are exceptional, and feature prominently in both symphonies.

Adding greatly to the Alnæs experience is the superb engineering given to them in the resonant Reforma Baznika in Riga. In stereo, there is a wide, immediate sound-stage, with pin-sharp location of solo instruments and orchestral departments arranged from extreme left to right. Moving to the 5.1 Multichannel track, the sense of space in the auditorium opens up breathtakingly; the orchestra seems to extend laterally beyond the speakers and there is heightened depth perspective which creates an illusion of sitting in the best seats before the orchestra. Every detail is captured, from the thwack of stick on drum-skin to the bow-on-string feel of rapid tremolando passages, with lovely luminous woodwinds (particularly the flutes). The auditorium's resonance clearly challenged the engineers, but they have managed to tame it very well, aside from a slight blurring of texture and a touch of boom from the timpani which is evident only at the loudest climaxes in what is a very healthy dynamic range. The mastering affords a very generous 78'14 of music.

I also commend the thorough documentation in the English and Norwegian booklet, putting the symphonies firmly in their historical and musical context, and the front reproduction of a lovely landscape oil painting by Wilhelm Peters is most appropriate and attractive.

For those interested in Romantic music, this is a compelling and worthwhile disinterment, superbly performed and recorded and a very auspicious first SACD from Sterling Records.

Norwegian composer Eyvind Alanes's first symphony sounds a lot like Glazunov in his prime. It is full of drama and melody. Other composers that come to mind while listening are Borodin and early Tchaikovsky - not a bad set of reference points for a virtually unknown composer. I think it is a better work than Grieg's lone effort in this genre (perhaps that's not saying much but, hey, I LIKE the Grieg) and Sinding's four. No, it's not a forgotten masterpice but I enjoyed its 41 minutes and four movements immensely.

The second symphony loses some of its Russian influence and gains a bit of the German school. I hear touches of Mahler and Liszt creeping into the dialog. The molto lento second movement is a funeral march in memory of a recently deceased friend full of melancholy and angst. The following allegro scherzando is lively and bubbling.

Performances seem fine and the playing of the Latvian National Symphony is of a high calibre. Sonically, I'm not so enthralled with this SACD. Too much hall sound obscures orchestral details. The whole sound stage is a bit conglealed and opaque. Nevertheless, I think this one is worth getting for the music. It's not likely to be recorded again any time soon and Sterling has done us a service of bringing these two works to light in SACD.