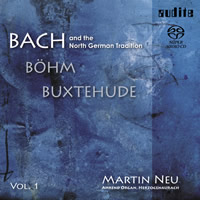 
In his youth, JS Bach came across two North German musicians who considerably influenced him: Georg Böhm and Dieterich Buxtehude. Their stylistic influence on Bach can be seen clearly in his early works. This SACD demonstrates the musical connection in a selection of pieces. Formal parallels and harmonic borrowings made by Bach from the North German masters become apparent.

In this recording, Martin Neu plays the Ahrend organ in Herzogenaurach. The organ builder Jürgen Ahrend from Leer/ North Germany is reckoned to be one of the leading organ builders and restorers, who has gained an international reputation particularly for his consistent restoration work and his great artistry in voicing. The Ahrend organ in Herzogenaurach was built by his son Hendrik Ahrend who continues the tradition of Ahrend organs.

A second volume dedicated to Bach’s South German icons is already in preparation. 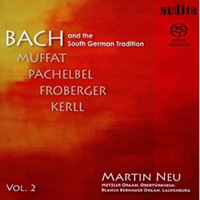