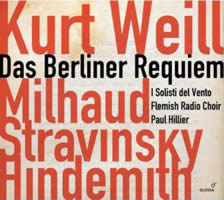 Now here is a fine piece of programming by Glossa. Igor Stravinsky, Paul Hindemith, Darius Milhaud and Kurt Weill inhabited a Europe which was still deeply traumatised by the horrors of the First World War, but was inexorably heading towards a new conflagration, arising from the development of the National Socialist Party in Germany. Artists were being encouraged by eminent thinkers such as Jean Cocteau to abandon German Romanticism and French Nationalism, replacing them with more accessible and simple forms. Each composer reacted in different ways to the challenge, and the five works presented here represent their struggles to warn, to comment on their milieu and yet to be true to their respective musical views.

In 1928, Weill accepted a commission from Radio Frankfurt for a new work, producing 'Das Berliner Requiem', described as a Cantata for tenor, baritone, male chorus and wind orchestra. It is, despite the contradiction in terms, a secular Requiem, based on poems by the Marxist playwright Berthold Brecht. These refer specifically to forgotten war casualties or victims of violent crime whose bodies have been ruthlessly disposed of and remain undetected. The Berlin Requiem has the distinction of being the most ascetic of its genre. Weill's scoring is sparse and lean, yet poignant, deliberate and dignified. His style mostly looks back to his roots; the choral writing often brings that of Brahms to mind - and for its opening and closing 'Great Hymn of Thanksgiving', Weill selected text from Brecht which deals with life's ultimate origins in grass and earth. Consciously or unconsciously, he makes a link here with "Denn alles fleisch es ist vie gras" from Brahms' German Requiem. JS Bach too is one of his Shades; in 'The second report on the unknown soldier', the baritone/bass has a long recitative clearly in the style of those in the St Matthew Passion.

The men from the distinguished Flemish Radio Choir under the redoubtable Paul Hillier give a deeply affecting and seamless account of the Berlin Requiem. They are ably supported by the wind players of I Solisti del Vento, whose crisp ensemble and stylish virtuosity blends perfectly with the choir's sonorous basses and gleaming tenors. The soloists are excellent too; Ivor Goossens extracts every ironic nuance from 'Red Rosa is long gone', above a forlornly waltzing accompaniment of sax and trumpets (the only time that Weill's cabaret style emerges). At the end of the lament for Rosa, the choir softly interject "Ruhe sanft" (rest in peace) most touchingly. Dark-toned bass Jacob Bloch Jespersen is magisterial and fluent in his orations, missing nothing of the bleak horror of Brecht's visionary texts.

Altogether this is an uncommonly fine rendition of the Berlin Requiem, so rarely recorded. Hillier's unerring direction reveals its stature and chilling impact as rarely before.

'Vom Tod in Wald' (Death in the Woods), one of the original sections of Das Berliner Requiem, was rightly subsequently ejected by Weill on the grounds that its style was too different to the other sections. It is indeed more avant garde and harmonically very bitter, allotted mostly to the solo Bass with stark brass accompaniment. "Full of disgust and cold with hate" goes one of the lines, describing very well the superb singing of Jespersen and I Solisti's baleful trombone playing.

Paul Hindemith, another German Jew, came under severe criticism from the Nazis, as did Weill. His bleakly realistic setting of Hölderlin's 'Der Tod' (Death) for TTBB of 1932 is, in contrast, richly-scored for a cappella male voices; there is much complex polyphony. Death comes "gently in the clouds of sleep", and with it an acceptance which the Flemish Choir and Hiller find movingly in the grave beauty of this brief work.

In the centre of this programme, we are offered both contrast and relief by Stravinsky's Octet for Wind, which he penned in the fermenting Paris of 1923. It is bold and sharply-drawn, and an example of what was termed the "neoclassical revival", a term which Stravinsky rejected as meaningless. Its intricate polyphony, mordant and often pugnacious, poses great challenges for the players, but I Solisti del Vento give a brilliant account. Tempi are close to those of Stravinsky's own recording, although usefully a little faster in the dazzlingly garrulous finale, and a slightly slower, more flexible pace for the Theme and Variations of the second movement. Stravinsky's players play the Theme woodenly, with a dogged metrical rhythm, but Hillier and his Solisti are quite flexible and sensuous, revealing more clearly that the theme is a distorted Russian peasant song, instantly recalling themes from 'The Rite of Spring' from a decade before.

Darius Milhaud's two complementary Cantatas for mixed voices bring a warmer, more optimistically lyrical yet none the less dramatic set of moods to the programme. The 'Cantata of Peace' of 1937 and the 'Cantata of War' (1940) show the direction in which the European political situation was moving, and how Milhaud's pious hopes were to be dashed. Of old Provençal Jewish stock, he had to flee after the fall of France in 1940, moving to the USA and joining Weill, Hindemith and Stravinsky in the New World.

Rarely heard these days, these settings of poems by his long-time Catholic friend Paul Claudel are rich tapestries of colourful choral textures, and exude a radiant beauty which belies the starker texts upon which they are founded. It is a wonderful change to hear the the pure, high voices of the women for the first time, especially their lovely solos. The Flemish choir's singing truly reflects the inward beauty of Milhaud's writing, which is far from those rapscallion comic gestures and frequent zany use of Jazz so familiar from some of his more famous works. The two Cantatas bring this excellent programme to a deeply satisfying close.

Glossa's balances and engineering do not disappoint either. The airy, highly detailed sound is demonstration-worthy in its focus and wide sound-stage. Brass and woodwind are thrillingly caught, soloists in the Weill are at the perfect distance, and those in the Milhaud works arise atmospherically from within the choir itself.

Concept and execution of this disc are both of the highest order, including the striking period art-work of its 3-fold Digipak. This holds removable contextual notes and full texts.

Whatever formidable technical and interpretive challenges posed by these vocal works are surmounted by the Flemish Radio Choir with aplomb. A thought-provoking and revelatory programme. Enthusiastically recommended.