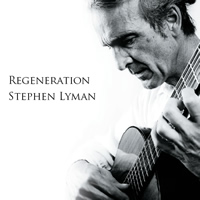 I'm writing as one who fell in love with the Classical Guitar as a student, tried hard to play one (but failed, to be truthful) and went to many solo guitar concerts of various kinds. I'm sure Stephen Lyman needs no introduction (there is nothing about him in the notes). Nor, in this audiophile community, does the IsoMike system (there is quite a bit about this in the notes). Looking at the booklet, and not understanding what (or who) was being Regenerated, I thought a helpful alternative title would be "One Guitarist with 4 baffled mikes, an impressive and expensive slew of equipment (and very good cables) with an eminent technical crew backed by large posse of equally eminent helpers".

I dutifully mustered my Magnepan speakers (because they were mentioned in the list of five monitor speakers used) and played the opening Prelude track to adjust the volume knob slightly as instructed, to ensure a realistic sound without blowing the Maggies or my amps up. I seemed to have a guitarist sitting just behind the front speakers, so I settled down to listen.

The sonics are marvellous, as expected. Every nuance of finger on string is captured, and the surrounding acoustic is excited by the few finger-squeak noises which Lyman makes. I suspected that more than one type of guitar was used, but was given no information about this by the booklet. In fact the booklet is mostly black and grey artwork, and although notes by Lyman promise program notes for six of the pieces featured (mostly composed by him), only two them were very briefly described, and the ones I had questions about simply were not mentioned. For example, in 'Three Sketches caractéristiques', why the French? What or who are they characteristic of?

Lyman certainly seems to have a fine technique, but the very narrow range of style and slowish pace of most of the tracks here doesn't really reveal much of it. Although the tiny Bartok dance transcriptions with their bitonal and modal folk influences are stylishly recognisable, as are some of Villa-Lobos references in Lyman's tribute tracks 'Two Etudes'. I also found it difficult to tell the Takemitsu from the Lyman. All of it seems to be blues-influenced, sporadically surging and improvisatory, with little or no basic pulse or discernible structure, or indeed any definable harmonic system. As the composer is mostly playing his own work, we can assume that the performance is 5-Star. There is nothing to set the pulses racing, however, and to me at least, no real emotion to be found. A cerebral approach seems likely, with some kind of existential motivation hinted at in the titles. If I was to be rude, I might say that this was like sophisticated and beautifully recorded 'noodling'.

I suggest listening to this with a glass of very good wine, or dipping into the album for its realistic sound, as (only) 45'40" seems too much of an exposure. Lyman's music is probably far more to be appreciated by players, rather than listeners. This listener, anyway. Shame about the music. But it does sound good.

From the opening bars of Stephen Lyman’s ‘Prelude,’ at the start of this disc, it is clear that both the tonal quality of Lyman’s guitar and every nuance of his playing have been captured by the IsoMike engineers with exceptional fidelity. Those who question whether a multi-channel recording is really necessary for a solo instrument should definitely try to hear this SACD. It is quite outstanding in its sonic realism. The only slight downside to the recording is that it has also captured a clearly audible low frequency hum, preceding and succeeding each piece that appears to emanate from the recording venue. Fortunately this hum is not audible during the actual music.

Stephen Lyman’s programme consists mainly of his own compositions, but it also includes Toru Takamitsu’s ‘All in Twilight’, a series of four short and sombre pieces written in1987 for the eminent British guitarist Julian Bream, the third of which has an engaging bluesy feel to it.
Lyman has also included his arrangements of three of Bartok’s ‘44 Duets for Two Violins’ that sound quite effective on the guitar. The first of these, ‘ New Year’s Greetings No.2’ (lasting well under a minute), provides virtually the only lively item on the whole disc. The other two reflect Bartok’s interest in Hungarian folk music, and its peasant tunes.

From thereon it is downhill, as the remaining ten tracks, all Lyman’s compositions, have a uniform sameness to them. The skeletal program notes in the accompanying booklet provide little information as to the reasons for the titles Lyman has assigned to his compositions, but even if they had, this would not have the altered the monotony of pace (slow to very slow) and lack of memorable ideas in them. Though the playing time of this disc is a mere 45’. 40” it seemed interminable and engenders the feeling that one has heard the same piece played over and over again.

Lyman is obviously a very able player so it is a pity that a more varied programme could not have
been devised that would have made much more of his undoubted talent.

A sonic gem that hasn't (the Takemitsu apart) the substance to back up the sound.

What can one say about the sonics other than to reflect that the guitar really does sound as though it is in one's room? A perfect recording from a technical standpoint in every imaginable way.

The performances are good too - the Takemitsu is persuasive and I think both the composer and the dedicatee (Bream) would be pleased with the account presented here. The Bartok arrangements are also despatched well (but the guitar cannot sustain to give the playful discords that one would find on the original two violin version, as demonstrated here: Bartok: Forty-Four Duos, Hungarian Folksongs). Sadly the vast majority of the short playing time (45'40) is devoted to Stephen Lyman's own works; they are sadly indistinguishable from one another and that is the solely defining characteristic of the music - it is if they totally lack ideas and are just improvisatory ramblings without coherence. Oh dear.

The notes too are pitifully brief - understandably perhaps. An opportunity was lost here to record clearly a good musician in some fine music; navel gazing was chosen instead.

Recommended to the lovers of fine recorded sound only.