Does anyone else around here hate listening to chamber or instrumental music recorded in churches when the miking so distant that ambiance swamps loud passages? If so, you can ...

Commenting purely on the mastering and not the content - looking at the waveform of the SACD content, it's clear this was mastered from 44.1khz PCM - so unless you want the ... 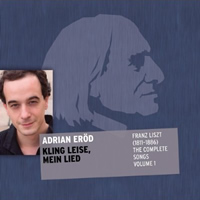 Most music lovers are surprised to learn that Franz Liszt wrote over 80 songs for voice and piano (over 120 if revisions are counted). Despite renewed interest in his music over recent decades, just a few of these appear on disc, mainly in general song recitals. These few, such as 'Die Loreley' and 'Oh! quand je dors', give no idea of the full range and richness of Liszt's lyrical gifts in his song output.

The forthcoming celebrations for Liszt's 200th birthday anniversary in 2011 has prompted a new Liszt Lied Edition on disc, which will be accompanied by publication of a collected edition of scores and a companion book. Wisely, the producers have elected not to present the songs in chronological order, but to build coherent programmes with a spread of languages and sources, for as a French-speaking Hungarian and cosmopolitan man capable of reading poetry in Italian, German and English, Liszt took his song-writing well beyond the standard German Lied. He has an uncanny ability to adapt his forms and style to each idiom. Expression of the sentiments and meaning of the poetry is always paramount.

Marsyas (for an explanation of the name, see the company's website) has been fortunate indeed to obtain the services of Charles Spencer as co-performer. He is one of the most sought-after accompanists, whose stellar career included twelve years as Christa Ludwig's favourite pianist. His contribution here is inimitable, not only fully supporting Adrian Eröd but bringing out all the poetry of Liszt's piano-writing, whether it be simple and sparse or virtuosic and orchestrally written.

Baritone Adrian Eröd (a former student of Walter Berry), trained in Vienna and a member of the Vienna State Opera from 2003, has sung a variety of roles such as Billy Budd, Figaro, Count Almaviva, Beckmesser and Loge. His voice has a very flexible range, with a sweet, light tenor-like upper reach and a very strong, dark and authoritative lower range. All of this flexibility is called for in this challenging programme. Although he has a touch of nasal congestion on consonants 'm' and 'n' (the sessions occurred in Jan 2009), his response to these songs is exemplary. As well as a honeyed cantabile in the Italian songs, he tackles a lengthy, vigorous melodrama in French with great dramatic flair, yet voices some of the simpler German love songs with subtle tone colours and great sympathy.

The recital programme has four songs which are said to appear on disc for the first time. There are 11 songs by German poets (mainly Heine and Schiller), 4 in French (mainly Victor Hugo), 4 in Italian (mainly Petrarch) and one each in English (Alfred, Lord Tennyson) and Hungarian (Horváth). The booklet has all the texts, with at least English and German translations as applicable.

With the absolutely gorgeous 'Angiolin dal biondo crin' (Little angel with blonde hair) ringing in my ears, from its lovely tune which lingers long in the memory to its exquisitely played accompaniment of fragile sweetness, I am delighted to welcome this new venture. The programme and performances make for an engrossing musical experience, with a superbly balanced and focussed recording in the glowing acoustic at RadioKulturehaus in Vienna. Disregard the STEREO indication on the disc and packaging; there is a very good multichannel 5.0 track which adds greatly to the sense of being present at the recording.

This well-filled disc sets a high standard for those to follow. Strongly recommended.