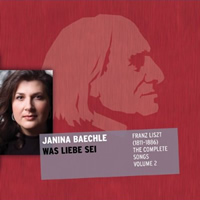 The forthcoming celebrations for Liszt's 200th birthday anniversary in 2011 has prompted a new Liszt Lied Edition on disc, which will be accompanied by publication of a collected edition of scores and a companion book. Wisely, the producers have elected not to present the songs in chronological order, but to build coherent programmes with a spread of languages and sources, for as a French-speaking Hungarian and cosmopolitan man capable of reading poetry in Italian, German and English, Liszt took his song-writing well beyond the standard German Lied. He has an uncanny ability to adapt form and style to each idiom. Expression of the sentiments and meaning of the poetry is always paramount.

Marsyas (for an explanation of the name, see the company's website) has been fortunate indeed to obtain the services of Charles Spencer as co-performer. He is one of the most sought-after accompanists, whose stellar career included twelve years as Christa Ludwig's favourite pianist.

Mezzo soprano Janina Baechle joined the Vienna State Opera in 2004, and many of Christa Ludwig's former parts were passed on to her. An obviously close rapport has been developed with Charles Spencer, which is well in evidence on this disc. Her voice is quite distinctive, warm and earthy in its lower regions, with a sweet, pure upper range. She has not only sung in Wagnerian parts but also in Mahler (Urlicht in the Resurrection Symphony as well as Das Lied von der Erde), and has toured in recital, presenting programmes in German, English, French, Italian or Russian. This facility for languages puts her in good stead for this Liszt cycle.

This second disc's programme suits Janina Baechle's mezzo voice very well. Most of the 20 songs are in German, apart from three in French. The German Romantic poets were preoccupied with themes such as identifying with iconic landscapes (e.g. the Rhine, meadows and forests) and legends (narratives e.g Goethe's 'Est war ein König in Thule, Heine's Die Loreley). There are also songs here about lost lovers, unrequited love, yearning for death and the pleasure of seeing the lover beside one as night falls. Liszt responds to these poems with unconventional and generally free forms, which allow him to alter tempo and key with changing moods. Many of these songs are slow moving and quietly intense, requiring great stamina and pitch control from the singer, and she responds with deep imagination and emotion. Charles Spencer's support for his singer is exemplary; at climaxes where she is singing in the lower register, he is careful not to cover her voice. His playing is unfailingly perceptive, and draws out many rich colours from Liszt's highly inventive and often surprising piano parts.

Not all of the songs, of course, are of the same quality. Several of the longish ballads, like those found in the complete editions of Schubert's songs, are melodramatic or overly sentimental, and very much of the period. There are a few miniatures, but also some deeply felt and utterly beautiful songs - I was particularly taken with the portrait of an impulsive heart ('Freudvoll und leidvoll' - Goethe), the sweet melancholy of departure ('Ich scheide' - van Fallersleben) and the conjuring of Night in 'Des Tages laute stimmen schweigen' - von Saar); this last song seems to foretell the late Lieder of Richard Strauss.

Full texts are given in the booklet, in English or German as appropriate.

Sonically, this volume echoes the fine engineering in Volume 1, with a pleasantly airy acoustic, excellent balance between soloist and piano, richly-detailed piano tone and a real feeling of the performers being just behind your front loudspeakers. As with Volume One, ignore the decals on packaging and discs claiming Stereo; there is a perfectly good 5.0 multichannel track which adds a great deal to the realism of the performances.

This programme is generally of serious and pensive moods, thus requiring good concentration while listening. It again adds greatly to one's understanding of how Liszt used the lied to express many of his innermost and deeply personal feelings in these songs. Definitely recommended.