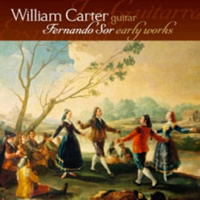 
World-renowned baroque guitarist William Carter presents an appealing collection of early works by Spanish guitar virtuoso and composer Fernando Sor. Sor's guitar music is some of the finest ever written for the instrument and this recording is unique as Carter employs a performance practice endorsed by Sor himself - playing with the finger tips.

Fernando Sor (1788-1839) was a contemporary of Beethoven, and like the German master, he published in a wide range of musical forms, his output including 2 operas, 7 ballets, 3 symphonies, a Violin Concerto, string quartets and trios with guitar, many Spanish songs and arias. Yet it is only for some of his 63 opus numbers of guitar music that he is at all known today. We are much in debt to the almost complete recording of his guitar works by Naxos in their Guitar Collection series (RBCD).

In the early C19th, however, Sor was considered to be the leading guitarist of his time. This popularity earned him a place in the household of the Duchess of Alba in his early twenties, and he shared this Royal patronage with the great Spanish painter Goya. Later, the Peninsular Wars forced him to move to Paris, where his teaching methods and guitar style were internationalized. He was a pioneering technical innovator in guitar playing. One of several teaching manuals, Sor's 'Methode pour la guitare', was published in French, German and English versions. It included exhaustive descriptions of various kinds of fingering and tone-colour production, and was copiously illustrated. Sor's concern was not only with technique, but also the instrument's acoustics and design.

Sor preferred to play with the finger pads and advocated keeping the nails short, as did Francisco Tarrega. In this recording of some early works by Sor, William Carter, lutenist and period guitar specialist, had to re-learn the finger-pad technique in his attempt to demonstrate Sor's sound-world. While this softer, more intimate sound of this style of playing was ideal for the intimacy of chamber and salon performance in the early C19th, the later availability of larger public concert halls required the use of nail-picking for a more resonant and incisive sound. Segovia was an influential advocate of this more flamboyant style.

Carter also had a new instrument made for him, a 6-stringed, lightly-built creation of expert guitar-maker Tony Johnson, based on several surviving classical originals. Presumably, although this is not directly stated in the disc notes, this new guitar was strung with gut.

The selected programme includes no less than 8 Minuets from early opus numbers, which are relatively slight but charming pieces, together with the Andante Largo, Op. 5/3, the very well-known Variations on 'O Cara armonia' from Mozart's Magic Flute (Op.9) and the Grand Solo Op.14. There are also 5 Etudes selected from Sor's 'Studies for the Spanish Guitar' Op.6. Carter's notes include useful comments on this music, as well an interesting summary of Sor's early career and discussion of the pros and cons of finger vs. nail-picking.

Carter certainly has the deftness and technique to play these pieces (although none of them are especially demanding). It takes time for the ear to get used to the much softer attack of the finger-pad playing; it the resultant sound is certainly softer, less focussed and more intimate than nail-picking. According to Carter, the sound is also more vocal in nature. Carter's playing is also restrained; indeed almost self-communing, rather diffident and self-effacing. He uses a very limited dynamic range, and even when invited to play forte by Sor, or even fortissimo in the Grand Solo, he hardly changes volume from this "close-to-the-chest" approach. This means that there is comparatively less light and shade in his playing, and thus less tension and resolution.

To my ears, such almost bland playing hardly sounds Spanish at all. Listen to Segovia in these pieces. Even with the little minuets his melodies sing out with a smile, and he puts vivid characterisation and phrasing into his playing, full of sunshine with only passing clouds. In the Mozart variations, Carter's 'Introduction' is softly-voiced and deeply understated, while Raphaella Smits, Julian Bream and Narciso Yepes all present it as an impressive drama, a miniature opera scena in itself. Although Segovia's own arrangement of Sor's Op. 9 Variations unaccountably omits Sor's Introduction, his playing of the Variations is a delight, sparkling with sly humour and many tonal colours which Carter eschews.

Linn's 5.1 recording is hardly challenged by the generally low-key playing, although a pleasant ambient space is provided in multichannel.

I would suggest that potential buyers should listen carefully to some tracks before committing to purchase; Carter's affectionate but de-focussed response to Sor's music is much less colourful and energetic than that of most of his colleagues (but has already been praised elsewhere). For me, there are far more engaging advocates of this remarkable composer.

Some delightful and charming music is let down here by an uncharacteristically bland performances from Carter.

As Geohominid has eloquently and comprehensively paraphrased Carter's philosophy of playing the works of Sor, I will not seek to repeat it less successfully. Suffice to say that the finger playing comes with an almost supernatural softness of attack. Less welcome though is the apparent restriction of dynamic range that this enforces on Carter. All too often, one only becomes aware of the possibility of dynamics when Carter plays something much quieter - this renders most of the music a monochrome texture and robs the notes of life that they could have had. I would hazard that using the fingers rather than the nails makes the music much more demanding - there are many instances where the rubato appears to be forced upon Carter rather than Carter forcing it upon the music but this is no excuse for a lack of imagination in how it is purveyed to the listener. The result is one of indifference to the music and the playing - a great shame because on past form, both deserve much more.

The recording from Linn is clearly good but that is of no great consequence when faced with such mediocre accounts.

Such a shame, for this enterprising release should have and could have been far more engaging. 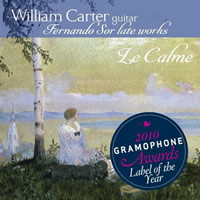