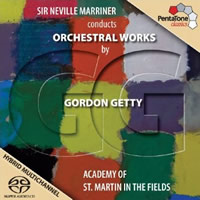 Under Sir Neville Marriner's inspired direction, the Academy of St. Martin-in-the-Fields clearly sound as though they are having fun. And so they should for the Ancestor Suite contains well characterised pastiches of the waltz, gavotte and polka amongst other forms - this is easily the best music on the disc and quite surpasses all that follows it (all items except the overture to Plump Jack) despite the continued advocacy of Marriner and his long time partners in music.

In the more lavishly orchestrated Plump Jack overture the quality of the recording by Pentatone is evident and is approaching their demonstration class. The other works are more lightly scored and even here the recording shines.

A word about the music - Getty is quoted in the notes as saying "There is still plenty to be said in C major"; he is probably right but I would observe that other (better) composers have had first pick.

Recommended if you are a fan of the composer, those of Marriner and the ASMF are better served with Mozart: 4 Horn Concertos - Civil/Marriner, Rossini: Overtures - Marriner or Mozart: Clarinet Concerto, Clarinet Quintet - Marriner, Marriner.