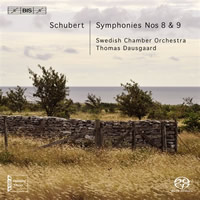 
In 2008, to great acclaim, Thomas Dausgaard and the Swedish Chamber Orchestra completed their 3-disc cycle of Schumann's symphonies. Together with a recording of Dvorák's Sixth and Ninth Symphony released in 2007 the Schumann discs belong to a series entitled 'Opening Doors', in which Dausgaard makes a case for performing 19th-century symphonic works with a chamber-sized band.

The turn has now come to Franz Schubert and his final works in the symphonic genre: the 'Unfinished' (Symphony No.8) and 'the 'Great C Major' (No.9). Both of these are also the most celebrated of all Schubert symphonies, which makes it all the more ironic that the composer never had the opportunity to hear them performed. As for the Eighth, with its distinctive, mysterious opening, it is not known why Schubert didn't complete it: a few jotted-down bars of a third movement is all that we have. The most likely explanation may simply be that Schubert remained unsatisfied with all of his attempts to match the degree of innovation achieved in the first two movements.

The Ninth, on the other hand, does run its full course - and most gloriously so, with a Finale of exuberant festiveness. Unfortunately for the composer, the great (or, as Schumann put it: 'heavenly') length of the symphony and the technical demands it placed on the orchestra caused the only performance planned in Schubert's lifetime to be cancelled. In 1839 the score was found among his papers by Robert Schumann, and received its first performance shortly thereafter by Mendelssohn conducting the Leipzig Gewandhaus Orchestra - eleven years after the composer's death.

Part of BIS's "Opening Doors" series of chamber orchestra recordings, this enticing set of masterwork symphonies from Franz Schubert presents these works with about 30 or so players. This, of course, has a big impact on the ensemble sound. Those who have become accustomed to large orchestra, string-heavy performances may not take too kindly to this approach. Me, I found it utterly delightful. Thankfully, they play modern instruments at modern pitch with no pretensions to historically informed performance practices - just plain 'ole high calibre, exuberant music-making. Despite the small orchestra, there is no lack of dynamics in Dausgaard's conducting. He shapes the music beautifully though some of the tempos are on the fleet side. The great C major clocks in at 58 minutes which seems to be typical for this work so some of this fleetness may just be an impression due to the smaller ensemble size and the great clarity Dausgaard achieves (I don't own the score so I can't say how repeats are handled).

The recorded sound is magnificent! Two different engineers worked these sessions (Martin Nagorni for the "Unfinished" and Andreas Ruge for the "C Major") and they were recorded at the Orebro Concert Hall, Sweden. A near-perfect blend of direct and hall sound - not over-resonant - make for an immediate and satisfying listening experience. If you are curious about how these works sound in chamber orchestra garb, rush out and buy this. You won't be disappointed!

EDIT: after posting this, I saw that Robert from BIS had already commented that all repeats are taken in these performances. That, then, explains why the performance sounds so fleet yet the total time is in line with typical timings for the Great C major (where some repeats are not taken).

The other day I listened to the ‘unfinished’ over the radio and wondered who these speedy players were. It turned out to be this recording. I remember that upon first hearing I found it ‘refreshing’. I no longer do. I find it disturbing and plastering away some of the more soul searching parts of a Schubert in distress. The first movement is marked Allegro moderato. Dausgaard is not ‘moderato’ at all; rather Allegro agitato. All detail gets lost. I fear that the problem with some conductors is that they feel the need to revamp too well known stuff by putting a different stamp on things. Sometimes it works, but often no more than once. Staying with SACD and the first movement: Jonathan Nott (Tudor) takes 16:20, as opposed to the 11:02 minutes job of Dausgaard. A difference of more than 5 minutes, which is 50 % of Dausgaard’s total duration! I must admit, however, that Nott certainly is slooooow. I then turned to the good old Sir Charles Mackaras (1992, Virgin Classics, RBCD) and the Orchestra of the Age of Enlightenment. None of the two above can compare to his rendition (timing 13:36 minutes). The sound is not as good, but still very acceptable. The lesson? Cherish your oldies.

There's also the better recorded Mackerras 8&9 on Telarc with the Scottish Chamber Orchestra. The first movement timing in the "Unfinished" is 13:58, and I agree it sounds just right. I have both Mackerras' discs, and just about everything else of his I can get my hands on, and admit to the prejudiced view that he was the greatest conductor of the last 30-40 years. Nonetheless I enjoy Dausgaard and Nott each in their very different ways, not just here, but throughout their sets. 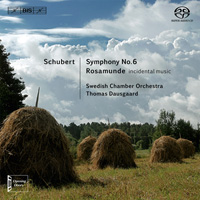 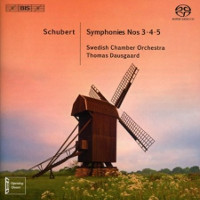 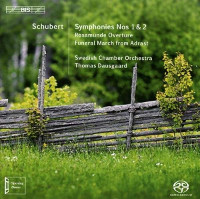