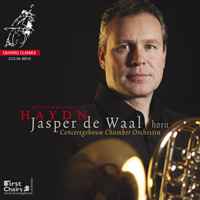 
Any self-respecting 18th-century prince relied on enormous, extravagantly expensive hunting parties with dozens of horsemen and hundreds of dogs, whinnying horses, wild bursts of barking, and above all deafening blasts on the horns, as a reliable status symbol. But the horn was not only an outdoor instrument; it was also a well-loved denizen of many a palace music room. The instrument, in the course of the century, had evolved from being primarily an attribute of the hunt into a full-fledged member of the classical orchestra. Stopping technique became widespread around 1750: by moving the right hand inside the bell, the player was able to fill in the breaks in the horn’s natural scale, making it possible to play melodies. This changed the roaring brassiness of the hunting horn into a somewhat veiled, warmer sound associated with the French horn. (Valves were not added until the 19th century.)

This disc is the latest in Channel Classic’s ‘First Chairs Series’ that feature solo work from some of the principals of the Concertgebouw Orchestra, Amsterdam, arguably the world’s finest orchestra.
Here, in a delectable programme of 18th century rarities from composers Joseph and Michael Haydn,
it is the turn of Jasper de Waal who has occupied the position of first horn of the orchestra for the past six years. Jasper de Waal’s horn timbre is both attractive and distinctive and, as one would expect from the holder of such a prestigious orchestral post, he displays consummate musicianship and prodigious virtuosity in equal measure.

Joseph Haydn’s D major concerto of 1762 is the only one to survive from the composer’s period with the Esterházy court in Eisenstadt. The provenance of the other D major concerto on this disc is rather more murky, and it could be one of the composer’s early works or written by his younger brother Michael Haydn. This is of little consequence as the listener will find both works to be immediately attractive, and the lively performances by de Waal and the Concertgebouw Chamber Orchestra led by Henk Rubingh could not conceivably be bettered.

Between these two concertos we have a curiosity. The music of the ‘Romance for Horn and String Quartet’ by Michael Haydn will be immediately recognizable to many listeners as the slow movement of Mozart’s 3rd Horn Concerto K447, but with a slightly simplified horn part and a new accompaniment for string quartet. It sounds quite charming in this intimate arrangement.

The rest of the programme on this SACD comprises first a stunning performance of Joseph Haydn’s ‘Divertimento a Tre per il corno da caccia’ by de Waal accompanied by Henk Rubingh (violin) and Benedkt Enzler (cello). This is a short set of variations of inceasing difficulty that effectively exploits the extremes of the horn’s compass. For the final work on the disc Jasper de Waal is joined by Jörgen van Rijen, the Concertgebouw Orchestra’s principal trombone, in two unusual movements from a Michael Haydn Serenade. In 1767 the ‘Adagio and Allegro molto’ featured here originally provided the opportunity for two of the outstanding soloists of the Salzburg court orchestra Ignaz Leutgeb and Thomas Gschladt to display their technique One marvels at the apparent ease and total unanimity with which the soloists on this disc perform these pieces.

Channel’s recording, made in the Waalse Kerk, Amsterdam, a venue that recording engineers Jared Sacks and Hein Dekker must know like the back of their hands, is superb. The horn is a notoriously difficult instrument to balance, particularly in chamber works, but here it is placed at the centre of a wide sound stage and never at any time dominates or overwhelms the orchestra or the solo string playing of de Waal’s colleagues. The 5.0 DSD recording made using state-of-the-art equipment that included Grimm Audio digital converters is wonderfully transparent, and captures both the ambience of the acoustic and the dynamics of the playing to the full. Excellent booklet notes by the distinguished horn player Herman Jeurissen, who incidentally wrote a number of the cadenzas heard in these performances, complete this enchanting release.