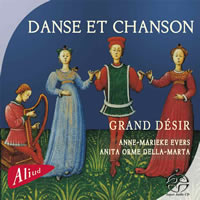 
The basse danse is a stately courtly dance who’s origin can be traced to Burgundy. It was enthusiastically taken up at numerous courts throughout Europe and flourished for a century long from the middle of the 15th century onwards. That courtly dance existed before this is clear: for example, a description of the basse danse can be found as early as ca. 1320, in a poem by the Toulousain priest, friar and troubadour Raimon de Cornet. No information however concerning its choreography can be found until the early 15th century.

The Brussels (Bibliotheque Royale de Belgique, Ms 9085, ca.1470) and Toulouze (L’art et instruction de bien danser , ca. 1496, by Michel Toulouze) manuscripts are the two most important musical sources of the French basse dance; although both manuscripts are dated to the late 15th century, stylistically their music resembles the earlier decades of the century. These manuscripts, along with a few additional sources, contain around fifty cantus firmi , varying in length between twenty-four and sixty-two notes, notated in slow semibreves without rhythmical variation. It is assumed that the cantus firmi of these basse danses notated in long semibreves provided a monophonic basis for polyphonic instrumental improvisation. Evidence for such a practice can be found in some polyphonic examples written out on the tenor-melody Re di Spagna.

Regarding performance-tempo, Daniel Heartz points towards the relation between the music and the actual choreography in his study concerning the basse danse: according to Heartz, each semi-breve of the basse danse-melody corresponds to one figure in the dance. Each figure consisted out of four movements equal in length, while the musical accompaniment took up six beats. Thus, the dancers moved fluidly on their toes in a three-to-two proportion to the music.

Secular Medieval music presents a thorny and controversial topic for musicological scholars. Most of the songs and instrumental tunes were carried around by itinerant players, and passed directly from person to person. Musical notation was still in the early stage of development, and difficult to interpret nowadays, as there were few or no clues about rhythm or tempo, let alone musical manuals. Nevertheless, there is great interest in attempting to disinter the sounds of the Middle Ages for their own musical sake, as well as to illuminate the social history of the period. Because of the paucity and often fragmentary nature of manuscripts, a great deal of such period music as recorded and performed in recent times relies heavily on the innate skill of musicians, who hopefully are well-versed in the scholarly evidence.

Grand Désir are a Dutch group who specialise in music from the Middle Ages; their artistic directors Anita Orme Della-Marta (recorder, harp) and Anne-Marieke Evers (mezzo-soprano) are students of the idiom and have taken their music to many concerts in Europe and Australia. In order to add colour to their programmes, they also include other players to obtain the "perfect instrumentation" for their projects. On this disc, they focus attention on two important musical forms from the Middle Ages, the basse danse, a Burgundian courtly dance, and the popular chanson, a French song based on extant poetry, advocated by well-known composers of the day, such as Guillaume Dufay and Gilles Binchois from the C14th.

The programme alternates instrumental dances and chansons quite charmingly; their modal harmonies always having an undertow of melancholy even if the tempo and words are quite cheerful. Melodies tend to be melismatic, deriving from plainchant as they do, and have a beauty of their own. Anne-Marieke Evers has a most beautiful voice, and makes it easy to forget the truth that it was almost certainly men who did the singing and playing (minstrels and jongleurs). At the time, working women were to be found mainly as artists and illustrators of manuscripts, as well as some poets. The various colourful blends of period instruments such as a treble recorder, harp, lute and Viola d'Arco are quite convincing.

Nestling within the programme are two Ballades by the contemporary Greek composer Aspasia Nasopulu. She was inspired by the poetry of Christine de Pizan (c. 1364 - c. 1430), one of the first women with a literary career, and the Troubadour tradition. The music is mainly serene and archaic, with many modal keys, and recalls Ancient Greek dramas with their half-spoken, half sung techniques. I am usually against the inclusion of such "foreign" elements into programmes of period music, but admit to being beguiled by Anne-Marieke Evers' gorgeous singing.

So, a very pleasant, if not entirely authentic, programme of music from the Middle Ages, with an informative booklet note (except for some English misspellings), and thankfully with the texts in English, Dutch and German as well as the original Low French. Atmospherically recorded in full DSD within a small church acoustic, but with realistic immediacy from all the musicians. Recommended.