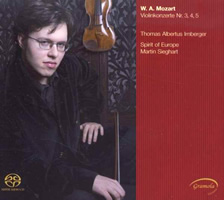 
Mozart's three great violin concertos were composed in the months of September to December 1775. At this time he was concertmaster at the archbishop's court in Salzburg, which allows the assumption to be made that he wrote the concertos for his own use. However, it cannot be excluded that the violin concertos were a sign of the composer's reverence for his father. On this SACD, the young Salzburg violinist Thomas Albertus Irnberger also presents the cadenzas by Paul Badura-Skoda. As in the case of the CD of Schumann's violin concertos (Gramola 98834), the orchestra 'Spirit of Europe' performs under the baton of Martin Sieghart.

After a very successful début on SACD, Gade: Violin Sonatas - Irnberger / Torbianelli, Irnberger lets himself down badly here and is not well served by the engineering team either.

Coupling the most popular of Mozart's violin concertos together on disc is, perhaps surprisingly, not yet an established feature of the SACD catalogue. The most direct (in terms of repertoire) is Mozart: Violin Concertos 3-5 - Manze and even ignoring the virtues (or otherwise depending on the listeners point of view) of HIP, Manze's versions have a life and spring to them that almost completely eludes these performers. Despite the claims made in the biography for Irnberger to be very interested in performing on historical instruments, he does not do so here and nor do the Spirit of Europe under Martin Sieghart make any serious effort down the HIP road.

The most appropriate comparison then is probably with Julia Fischer's set (Mozart: Violin Concertos 1, 2 & 5 - Fischer, Kreizberg and Mozart: Violin Concertos 3 & 4 - Fischer, Kreizberg). As with Manze, Fischer's music making is a world apart and just a few seconds transports one from the mediocre to the sublime. Where Fischer is transcendent, Irnberger is steadfastly ploughing a rather dull furrow. The tempo choices are partly to blame, with all consistently a notch slower than Fischer and phrasing to match rather than alleviate the plodding tendency. More troubling still is the execution of cadenza's by Paul Badura-Skoda which are unintentionally all too aurally nauseating rather than merely unsettling.

The icing on this rather unappetising cake is the boxy and constrained acoustic (or recording) emanating from the Salle de musique Gneis (Salzburg) which makes the double bass line boom as if one was hearing the combined forces of the Vienna and Berlin Philharmonics in Bruckner.

This disc cannot be recommended for anything other than as a place mat.