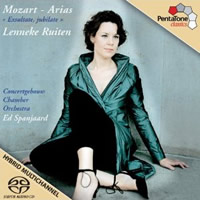 PentaTone’s growing reputation for discovering and promoting promising young artists will be further enhanced by this lovely recital of some of Mozart’s most ravishing vocal music. The young Dutch soprano Lenneke Ruiten has chosen the program herself for this disc, seven concert arias and the well-known motet ‘Exsultate, jubilate’.

The arias encompass a wide range of emotions, and the vocal pyrotechnics occasionally required present many challenges for any singer, not to mention inevitable comparisons being made with performances of them by many of the great singers of the past. Lenneke Ruiten opens the disc with the much-recorded aria ‘Vorrei spiegarvi, oh Dio’ K418 in a breathtaking performance that displays both the range and flexibility of her voice. The opening section of the aria, in which she is matched with the exquisite phrasing of the oboe soloist from the Concertgebouw Chamber Orchestra, shows her excellent intonation, while the astonishing vocal leap towards the end of this aria is effortlessly achieved.

Mozart’s first great extended concert aria, that follows, is in three contrasting sections: ‘Ah, lo previdi!’ – ‘Ah, t’invola’ – ‘Deh, non varcar’ K418. It was written for the soprano Josepha Dušek, wife of Czech composer Franz Xaver Dušek. Mozart was obviously proud of this piece as his letters show that he regularly recommended it to his pupils. Lenneke Ruiten certainly conveys Andromeda’s rage effectively in the aria’s opening section and is touchingly poignant in its latter stages.

‘Ah se in ciel, benigne stelle’ K538 allows Ruiten to display her coloratura skills and excellent breath control to dazzling effect, while the other great aria also written for Josepha Dušek ‘Bella mia fiamma, addio – Resta, oh cara’ K528 is notable for the dramatic delivery of the text. Ruiten’s performances of the remainder of her programme are equally accomplished ending with a spirited account of ‘Exsultate, jubilate’ K165.


Special praise must be given to the sympathetic and supremely polished accompaniments throughout this recording provided by Ed Spanjaard and the Concertgebouw Chamber Orchestra whose playing in all departments could hardly be bettered. The soprano’s voice and the limpid orchestral textures of Mozart’s miraculous creations are beautifully captured in the ideal acoustic of the Waalse Kerk, Amsterdam by the Polyhymnia recording team (Producer Everett Porter, balance engineer Jean-Marie Geijssen).

In recitals of this type the juxtaposition of similar material can make for a program that has insufficient variety, but such is the quality of Ruiten’s voice and her artistry, that any concerns on that score quickly disappear. Judged by any criteria this is an enthralling SACD.
The disc booklet notes are mainly about Lenneke Ruiten rather than the music, but all the texts are provided in both Italian and English. At only thirty two years old Lenneke Ruiten already sounds a fully matured artist and this excellent recording will further enhance what one hopes will be a blossoming career on the opera stage, in the concert hall and in the recording studio.

To see a different, lighter, side of this singer’s infectious personality visit http://www.youtube.com/watch?v=gl6YHQVmgmU&feature=player_embedded for a truly captivating performance of ‘Glitter and be gay’ from Bernstein’s ‘Candide’