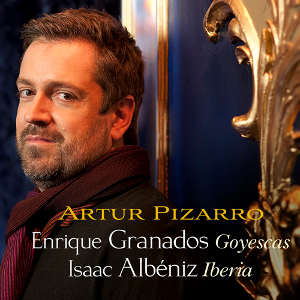 Pizzaro writes effusively in his notes for this pair of discs about hearing this music as a child, played by his pianist-teacher grandmother in their Lisbon apartment building. It clearly made a deep impression on him, and was a significant factor in his training by teachers who themselves were embedded in the Golden Age of piano playing in the first half of the twentieth century. He admits a great debt to Alicia de Larrocha as the foremost exponent of Granados and Albéniz, referring not only to her seminal recordings but also her recent collaboration with Douglas Riva on his authoritative edition of the Granados works. Pizzaro also tells us that whenever he studies Larrocha's recordings, he hears in his head her admonition to him: "You must not imitate me!". He does not do so.

For his own first recording of these essential sets of Spanish piano music, Pizarro elected to play a new Blüthner concert grand piano ("born" on Sept 1 2009), recorded in the Blüthner Pianofortefabrik in Leipzig from 2-6 September 2009. Most pianists would want to have a long period of 'playing-in' such an instrument before chancing it in concert, let alone recording with it. Pizzaro, however, considers that Blüthner have retained the sound from that Golden Age of piano building between the World Wars, with a fast action and a slimmer bell-like sound, which comes to closer to the sound of pianos that Granados and Albéniz might have used.

Pianists who tackle the works of Granados these days have a dilemma; the composer invested them with many markings demonstrating his own rubato-rich rhapsodic style, but taking this printed text too literally would loose line, pulse and basic shape. The Goyescas in particular, love-poems inspired by paintings of Goya (which as yet are not reliably identified), are an extreme form of Schumannesque Romanticism and potentially prone to becoming overblown and overheated. Granados' legacy of piano rolls, however, despite some short-comings, shows that despite his virtuosity, the composer's playing was keenly musical and without cloying sentimentality. Alicia de Larrocha inherited this tradition from her teachers, and hers are still the supreme recordings of the Goyescas, along with those in Douglas Riva's excellent complete survey of the Granados piano music (RBCD).

Pizzaro's timings for all the Goyescas are notably slower than those of de Larrocha and Douglas Riva, sometimes by several minutes, a significant effect in such short pieces. While his playing is always beautiful, capturing the dream-like romance of these vignettes, he tends to linger lovingly over details, with long drawn out hushed musings which almost becalm the music's flow. Several of the pieces drag terribly, such as No. 2 "The Love Duet" - at 13:31 compared to de Larrocha's 11:19.

No. 4, "The Maiden and the Nightingale" has an almost independent existence as a popular solo piece, but Pizzaro loves it to death, reversing several of the composer's accelerando marks to ritardando and even drastically slowing down trills. Pizarro's clocks 8:05, while de Larrocha's 6:41, Artur Rubenstein's impassioned 4:58 and the composer's 5:58 all capture the underlying heartfelt simplicity of this exquisite piece far more convincingly. Incidentally, Pizzaro gives us only the usual set of 6 Goyescas as originally published; two later ones can be found on Riva's disc, and Larrocha includes "El pelele".

Enervating though the Goyescas are in Pizzaro's hands, he responds more alertly to the four sets of impressionistic views of Spanish life which mark Albéniz's Iberia books. These pieces even look formidable, their pages black with notes and complex notation on three staves, which often has hands inter-tangled. Once more, Alicia de Larrocha's recordings set the standard, along with Hamelin's total technical mastery (RBCD), and the stunningly vibrant panâche of Yoram Ish-Hurvitz (Albéniz: Iberia Vol. 1 - Yoram Ish-Hurwitz) and (Albéniz: Iberia Vol. 2 - Yoram Ish-Hurwitz).

Pizarro's 'Iberia' timings are again nearly uniformly slower than those of his peers, although not so drastically. His playing is certainly well-articulated and expressive, but Iberia's primary colours are less saturated, the portrayals of swirling crowds, festivals, sleazy alleys and wine bars less exhilarating. Even the scorching dryness of sun-bleached landscapes and town-scapes rather elude him. Above all, he is too controlled, with no real risk-taking; the approach is more considered than free and flamboyant. My SA-CD choice here would be for Ish-Hurvitz, whose recent set has received considerable acclaim, not just from myself. However, it comes on two discs with no fill-up - but the recording of a Steinway D is stunningly realistic, more solidly impressive than the Linn discs.

Pizzarro's Blüthner is nevertheless well-captured by his engineers, nicely framed in a responsive acoustic, but there is some clattery action noise in the piano's gleaming high treble register. This may possibly be due to the instrument's newness, but it does somewhat tarnish its bell-like singing tone in that region.

As a convenient coupling, this is a useful issue, but one must remember that this is only a first recording of these works, which Pizzaro evidently loves so much. No doubt, therefore, he will record them again as his career evolves. Meanwhile, I would not suggest that it should be one's only copy of these uniquely attractive and evocative piano classics. There are prior claims which are much safer.