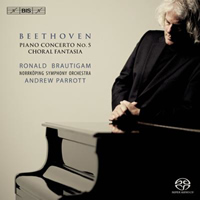 
For the final instalment of his survey of Beethoven's works for piano and orchestra, Ronald Brautigam has saved 'the final crowning glory of his concerto output', as Beethoven specialist Barry Cooper describes the Fifth Piano Concerto in his liner notes. The work has become known as the Emperor Concerto, as it shares its key (E flat major) as well as a certain sense of power and grandeur with the Third Symphony, the 'Eroica'.

It is coupled on this disc with the Choral Fantasia - an intriguing work scored for piano, orchestra and chorus with vocal soloists. The explanation for this unusual combination is that Beethoven wanted to provide a fitting finale for one of his mammoth concerts in Vienna. The concert, which took place on 22 December 1808, included performances of the Fifth and Sixth Symphonies as well as the Fourth Piano Concerto and two movements from the Mass in C major; the Choral Fantasia thus brought all of the evening's performers on stage once more before the end of the concert.

The individual discs in Ronald Brautigam's series have received numerous distinctions, including a MIDEM Classical Award in 2010, and his performances have been weighed against classic recordings by legendary pianists. 'Brautigam's account [of Concerto No. 1] compares with Richter's for sparkle, with Pollini's for cleverness, and with Michelangeli's for liveliness... The performance of Beethoven's Third Concerto that follows is even better', wrote the reviewer on website All Music.com, while the one in Gramophone deemed that the recording of the Second Concerto was 'almost as good as Serkin's account with Ormandy, which is saying something!'

In the review in International Record Review of the penultimate volume, finally, the series so far was summed up as follows: 'For my money, Brautigam and Parrott are setting a new bench-mark, and I eagerly await the final instalment.' It is of course a great pleasure to be able to announce the release of that longed-for disc, with Ronald Brautigam, the Norrköping Symphony Orchestra and Andrew Parrott in their usual top form, and with the brief but crucial appearance of the eminent Eric Ericson Chamber Choir in the Choral Fantasia.

Ronald Brautigam is the epitome of the virtuoso pianist who is highly musical yet self-effacing in his approach to the keyboard literature. Brautigam has this knack of communicating the notes with complete authority but without drawing undue attention to himself. He is a complete and utter joy to listen to in this warhorse repertoire where so many modern pianists feel the need to make the notes say more than they should, drawing attention to themselves in the process. This, the final installment of Brautigam’s traversal of the Beethoven piano concertos, maintains the high standards set by the previous three releases. Of particular note in this series of recordings is that Brautigam plays a modern Steinway piano (hooray for that!) and while Andrew Parrott is noted for his forays into “historically informed” performances, the Norrkoping Symphony Orchestra here is allowed to use vibrato, albeit somewhat sparingly, where appropriate (hooray again!).

This Emperor Concerto is beautifully played by all concerned. There is simply nothing about this performance to be critical of and much to praise. In an interview in the excellent booklet that accompanies this SACD, Brautigam is asked about playing this music on modern instruments (having spent considerable time recording LvB’s sonatas on fortepianos also for BIS) and his response is that he likes to incorporate some of the effects of playing the older instruments in his playing (e.g. sharper, shorter attacks). Further, Brautigam views these concertos more as chamber pieces where piano and orchestra are working intimately together rather than the typical piano versus orchestra approach that many performers adopt. As such, for these recordings, the piano is situated in the middle of the orchestra with the lid off thus creating an enveloping and collegial atmosphere with the orchestra. It is very effective in achieving that aim. The playing of the Norrkoping Symphony is quite wonderful and Parrott’s direction is perfect. So, in sum, these performances are a hybrid that occupy a space between old school, large orchestra performances and historically informed performances that employ small orchestras and a fortepiano. It’s a hybrid that serves this music well.

The Choral Fantasia is the filler and that, too, is superbly executed by all involved. Here, the Eric Ericson Chamber Choir joins the milieu near the end of the work to excellent effect. This work is a bit of a pastiche and, frankly, I would have much preferred to have a performance of the Triple Concerto instead. As it is, the total timing of this SACD is just 52:38 making it less of a bargain in today’s competitive field. Nevertheless, the superb quality of the music making trumps the short disc timing and one should strongly consider this performance of the Fifth Concerto as worthy of the best.

The recording was done in December, 2009 in the Norrkopping concert hall and was engineered by Marion Schwebel . The specific PCM master resolution is not provided but it is likely a 24 bit/44 kHz recording which BIS were still using at that time. BIS have since moved to higher resolution masters for their recordings. However, don’t let that deter you for one second from this excellent sounding disc! This is a masterful recording of piano and orchestra. Everything is so well integrated sonically and the piano has that characteristic Steinway midrange body. The string sound is also excellent and the balance between the hall and orchestra is perfectly judged. Highly recommended.

I just listened to the "Choral Fantasia". The performance was pretty fine but not excellent. The playing of the Norrköping Symphony Orchestra was mostly shy although the march variation was sharply performed. Otherwise the strong accents of the music were gone. Beethoven was short-tempered man.
Vänskä should record the piece for BIS with the Minnesota Orchestra. The other works could be Piano Concertos Nos. 1 & 2. This means that the total time of the album would be slightly over 80 minutes [35 + 30 + 17 = 82]. The soloist could be Yevgeny Sudbin who has brought out two wonderful SACDs of Beethoven's Concertos.

This series of the Beethoven pcs includes some interesting alternative material and an unusual approach to performance practice. Brautigam plays a modern piano but with the lid removed and positioned in the center of the orchestra. The effect is something like large scale chamber music, perhaps less apposite in the choral fantasia than the rest of the set. I think it works in it's way, but I'm also looking forward to the completion of Sudbin's set. 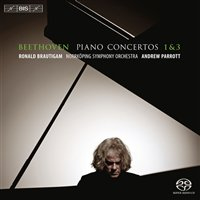 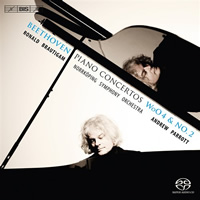 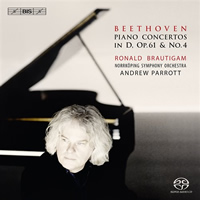