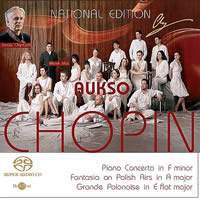 BeArTon have been charged with recording the new Polish National Edition of Chopin's works. The compilation of a new critical edition has itself been a long-term and complex operation; Chopin entrusted his publications to many publishers in France, Germany and England, and since then many other printers have made their own editions. A major complicating factor has been Chopin's habit of often having several perfectly valid autographs but each with markedly different versions.

Series A of the National Edition included authoritative new versions of scores which Chopin himself prepared for publication, each being recorded on RBCD as the volumes were completed. Series B contained the unpublished juvenilia and posthumous works, which were issued as hybrid SACDs. The present disc is the first part of a new series of SACD recordings using some of the Series A scores, presumably as part of Poland's "Chopin Year 2010". It offers three of Chopin's early works with orchestra, spanning a few years either side of 1830.

I have previously admired the vibrant playing-style, versatility and sheer enthusiasm of the AUKSO Chamber Ensemble, now one of Poland's most important orchestras, under the baton of Marek Mos (amusingly portrayed on the disc's back cover seated regally in an over-the top throne-chair). The soloist is Janus Olejniczak, in my view one of the foremost Chopin interpreters of our time. The pieces were recorded during January 2010 in Katowice's Music Academy Concert Hall, which has a wonderfully glamorous and lively acoustic. Olejniczak appears to be using a Steinway piano, which is ideally balanced in front of the orchestra. The instrument itself very much "in" the acoustic, so its tone can develop fully; there are no fingerboard or pedal noises as often heard when the microphones are too close. The resulting overall sound features a wide sound-stage, seemingly extending beyond the listening rooms side-walls, and with considerable depth. In multichannel one is fully immersed in the hall's acoustic bloom, and if you prefer a closer-sounding, slightly drier sound, then the stereo track is ideal.

One usually hears these pieces, particularly the concertos, played with a full symphony orchestra, and the relative plainness of the orchestration has often been criticised - as has the playing; most orchestras, unchallenged, simply lay down a routine reading. In fact, Chopin very much had in mind the orchestral accompaniments which Bellini produced to support his operatic voices; the spare textures and simple harmonic progressions supported singers ideally, just as Chopin's do for the piano soloist.

AUKSO (which is Greek for "growth") numbered 19 members for this recording, about the size of band which Chopin would have expected in the 1830s. Thanks to their artistry and a generous helping from the hall acoustic, their sound is full-bodied and easily a match for the Steinway in full flight. In the F minor concerto, where the orchestra takes the largest role, I heard many counter-melodies in the orchestral parts which usually go un-noticed. And I must commend the AUKSO bassoon soloist, who duets so delectably with the piano in each piece.

Sometimes a reviewer's life is made easy by a recording which is so "right", musically, performance-wise and technically, that no extended comparisons are required. One just sits back and enjoys the experience. This is one such recording. The Fantasia on Polish Airs in A major, op.13 is rarely encountered; its beguiling chain of popular tunes is both elegantly and expressively served up by the performers, with lovely work from the woodwind. Olejniczak gives us faultless runs, glittering roulades and subtle rubatos which make this lovely trifle quite delightful.

Chopin's F minor concerto was in fact the first he composed, and is probably the most favoured by concertgoers, mainly on account of its uniquely effective slow movement, which poor Chopin was beseeched to play at almost every one of his concerts. The wonderfully expressive orchestral support allows Olejniczak's poetry to fully take wing in all three movements; the dramatic operatic recitative, raging passionately over softly shivering strings in the Larghetto is ravishingly done, and a smilingly skittish and colourful finale rounds off an outstanding performance.

The final piece was composed shortly after the young Chopin left his homeland and took up residence in Paris. Prefaced by the lyrical serenity of a solo Andante spianato, with its haunting and long-spun cantilena, the horns usher in a brilliantly aristocratic 'Grande Polonaise' in E flat major, ending the concert with a stunningly fluent virtuoso display.

BeArTon's booklet notes are, as usual, very informative and generally well translated into English, if sometimes rather obliquely. I have, however, noted that the tone of the information is sometimes unusually technical and rather abstruse. There are phrases like "New poetics resulted from a non-trivial use of harmonics and rich ornaments" and "creating a quasi-oniric or possibly fabulous background" (which had me scurrying for the dictionary). To my mind this heavy style is rather off-putting to the general music lover, although I do appreciate that the documentation of performances from the National Edition scores should have some scholarly element.

This is a disc obviously made with love by performers who have Chopin's music in their veins. It is most atmospherically recorded, giving the illusion of being present at the performances. I have no doubt it will be one of my discs of 2010. Chopin-lovers should not miss this one!

BeArTon’s on-going series of recordings of the complete works of Chopin in a new National Edition goes from strength to strength, and this latest issue proves to be outstanding in almost all respects.

In his solo recordings of Chopin’s Waltzes, Polonaises and Mazurkas, Janusz Olejniczak has already shown himself to be a stylish and sensitive performer of this composer, with playing that is completely free from exaggeration and any of the mannerisms of say a Lang Lang that can become tiresome on repeated listening. Olejniczak puts his considerable pianistic powers totally at the service of the composer and consequently achieves most satisfying results. On this SACD the splendid and characterful AUKSO Chamber Orchestra of Tychy under Marek Mós accompanies him, and Chopin’s often much maligned orchestration emerges with a freshness absent from many recordings using larger forces. Nowhere is there a trace of routine in the playing thanks to Mós’s meticulous direction of his musicians.

Of the three early works on this disc the delightful ‘Fantasia on Polish Airs’ is the least familiar and, in a performance as fine as this one, its 15 minute span passes all too quickly. Olejniczak’s relaxed and expressive performance of the F minor Piano Concerto is full of fantasy and breathtaking sensitivity while the ‘Andante Spianato and Grande Polonaise’ that completes the disc, is played with a wonderful combination of poetry and panache by this supremely gifted pianist.

As on the previous issues in this series, the accompanying notes by the producer, Marek Wieronski are detailed and erudite if perhaps a little too academic in style. A few minor errors have also not been spotted at the proofing stage, e.g. The Fantasia is Op.13 at the start of the booklet, but is transformed into Op. 14 on the last page, whilst the Piano Concerto Op.21 becomes Op. 2 on page 4.

The HD PCM 5.0 recording, made in the Music Academy Concert Hall in Katowice, is generally both clean and easy on the ear, while the ambience, of what sounds to be a rather capacious venue, has added a lovely bloom to the sound of Olejniczak’s piano. There is, however, a slight tendency for the orchestral sound to harden and lose definition in some of the louder passages.

Though there are many alternative recordings of these pieces in the CD catalogue and, in the case of the concerto, even on SACD, these idiomatic and eminently satisfying performances can be unhesitatingly recommended to all lovers of Chopin.