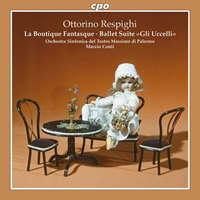 
Of Dolls and Birds – in Surround

For Ottorino Respighi occupation with music history and the old masters was not only a noble pastime but also a source of inspiration for his own composition. In 1927 he formed what might be called an ornithological suite for small orchestra by the name of Gli Uccelli (The Birds) from various harpsichord and lute miniatures. With these picturesque snapshots he is shown to us from his remarkable side as a sensitive observer who saw the pictorial in everything. All the pieces contributing to the filigree birdcage of Gli Uccelli have a characteristic coloration and very simply serve the purpose of enhancing the hidden moods – as Respighi perceived them – with a certain instrumental cosmetics. In 1919 Respighi had turned to some Rossini gems, and the Ballets Russes had ordered a doll ballet from him. He made selections from the Swan of Pesaro’s late piano compositions but did not limit himself to orchestrating them. He grouped, modulated, organized, abbreviated, and instrumented until the result was not a mere suite but a series of pictures with a compelling logic all of its own.

This is the first recording of both ‘La Boutique Fantasque’ ballet and ‘Gli Uccelli’ (The Birds) to appear on SACD, though in the case of the former work many will be familiar with Arthur Fiedler’s celebrated 1956 recording of excerpts, available on ‘Living Stereo’, that still sounds remarkable for its age. On this new recording, however, we are given the complete 45-minute ballet and are thus able to savour every note of this delectable score. Conti’s tempi throughout this work are what might best be described as danceable. He does not attempt to treat the ballet as merely an orchestral showpiece, and his less frenetic approach certainly pays dividends in allowing the listener’s appreciation of Respighi’s glittering scoring of Rossini’s captivating melodies.

Respighi describes ‘Gli Uccelli’ as a ‘Suite for small orchestra’, but on this recording the orchestra used sounds too large and cumbersome for this Neo-Baroque suite. Though Conti’s tempi are not particularly slow, the orchestral playing lacks the crispness and sparkle of many of the alternatives to be found on CD. He is much more successful in the slower sections such as ‘La Colomba’ and ‘L’Usignolo’ where his orchestra respond with an appealing warmth and sensitivity.

Although CPO’s 5.1-channel recording is fairly closely balanced there is still plenty of air around the instruments, and the warm acoustic of the Teatro Massimo does allow Respighi’s delicate and extensive use of percussion to emerge clearly. The entertainingly discursive, informative, and slightly eccentric, notes by Eckhardt van den Hoogen complete this enjoyable issue. 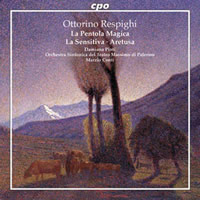