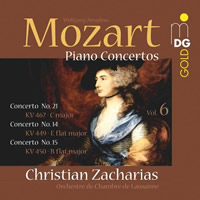 
Production Records
Six piano concertos in a mere twelve months: in no other year was Mozart as productive in this genre as he was in 1784. Christian Zacharias and his Lausanne Chamber Orchestra have taken considerably more time with their interpretations of Mozart’s piano concertos – and with sensational results. This complete recording even now promises to occupy one of the top ranks on international lists: Zacharias is able perfectly and seamlessly to transfer his inimitable touch and sound culture to the orchestra.

Public Pleaser
Mozart wrote the Concerto in E flat major (KV 449) especially for his pupil Barbara Ployer; but, as the composer enthusiastically wrote to his father on 20 March 1784, it was also “extraordinarily pleasing” to the public. Mozart devoted great care to the string part and marked the wind parts “ad libitum.” The piano also retreats behind the strings one time after the other, only then to shine with all the greater virtuosity in the finale. Mozart sets his accents very differently in the Concerto in B flat major (KV 450). Here the winds and strings energetically engage in mutual competition, and the piano even gets in the mood for hunting music – so that, as Mozart confided to his father, the musicians “work up a big sweat.”

Proud Papa
The Concerto in C major (KV 467) currently numbers among the great Salzburg composer’s most frequently performed piano works. It moved Leopold Mozart to tears of joy on its premiere on 12 March 1785 when he saw how enthusiastically the public responded to it. This is a work brimming with melodic ideas and proof that its genial creator did not necessarily follow the analytic rules imparted by conservatory teachers to their pupils.

Sensational Results
For more than ten years now the pianist, chamber musician, and conductor Christian Zacharias has collaborated with MDG – an exclusive partnership and in every respect a joint venture that has yielded what are without exception outstanding productions. As Echo Prize in 2008, an award from the international recording critics as Artist of the Year at the Midem in 2007, and many other distinctions impressively document this success story.

This release picks up where the previous volumes have left off and one cannot really fault the playing in any way.

Listening to this disc is almost pure pleasure for tempo choices, balances between piano, orchestra and the respective sections are as close to ideal as one could wish to hear on modern instruments. The phrasing is also pleasingly refined and not in the least Romantic but of course contains much beauty and ardour in the famous slow movement to the 21st concerto. The only grumble is the cadenza that Zacharias composed for the first movement of the 21st concerto - it tries to be a little too clever and doesn't quite work for this listener; a shame, for those in the 3rd movement are exquisite.

The same sterling qualities apply in concertos 14 & 15 (although here Mozart left his own cadenzas) but there is a suspicion that the denser string writing would gain more from period instruments than in the later C major work; the Orchestre de Chambre de Lausanne do their best (and it is very good) but it seems a little too weighty, as does the modern Steinway cf a fortepiano. For most listeners these are trifling quibbles that will be given no further thought having heard the disc once but for those doubtful, the opening to KV 449 is probably the best illustration of the potential pitfalls. Vibrato is not completely eschewed in the strings and is rather deployed (as was the intention at the time) as an ornament to embellish selectively - it works very well and helps lighten textures dramatically without making longer lines in any way anaemic.

The sound is, as ever from MDG, a 2+2+2 format which should have many beneficial effects for those with a suitable set-up; this is not the same as the ITU standard (which most companies record for) and so listeners without a comparable set-up cannot gain the full benefit of such a recording technique. Allowing for that aspect, the sound is clear and rounded - a very pleasant experience if not the best that one could ever hear. 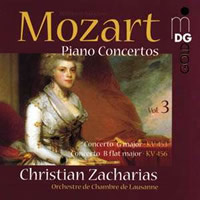 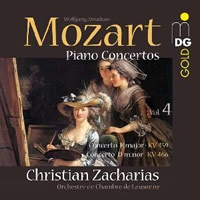 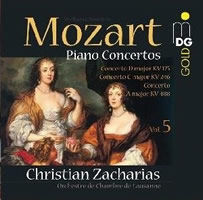 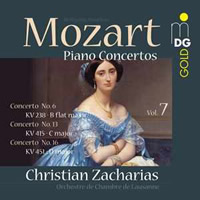 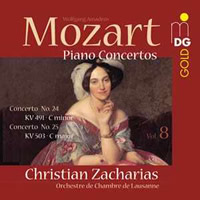 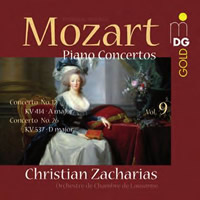 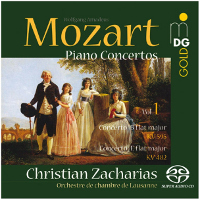 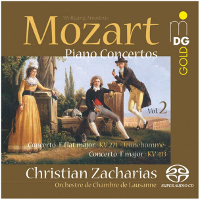