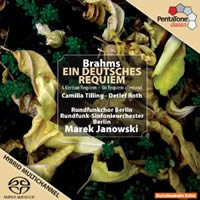 A beautiful account of a profound work from the maturing Brahms.

If the listener were to glance at the total time taken (just under 69 minutes) for this performance then they might, incorrectly assume that Janowski asks for nothing special from his orchestra, chorus and soloists. However this is very much a performance of extremes, so that the opening two movements ("Selig sind, die da Lied tragen" and "Denn alles Fleisch es ist wei Gras") and the concluding "Selig sind die Toten" are somewhat slower than normal (between 1-2 minutes each on most accounts of a similar overall length), yet "Wie lieblich sind deine Wohnungen" and "Denn wir haben hie keine bleibende Statt" are similarly quicker than normal - "Ihr habt nun Traurigkeit" is, necessarily, conventional in tempo and "Herr, lehre doch mich" is also conventional.

That Jurowski makes these extremes of tempo, especially the slower ones, work is a tribute to both his grasp of the structure of the playing and singing he draws from the Rundfunkchor Berlin and Rundfunk-Sinfonieorchester Berlin. For example, the crescendos in "Denn alles Fleisch..." have the extra room to become even more powerful and towering in their intensity. At no time does the music feel as though it is dragging, nor does the tension slip from the grip that Janowski exerts on the score. Certainly the extra space afforded to his musicians allow them to emit sounds that come close to matching their city's more illustrious counterparts.

More amazingly, is that the rather brisk tempo for "Wie lieblich sind..." does not sound in anyway rushed; instead the effect is that any potentially cloying sentimentality is dispensed with and this movement instead gains a radiant freshness and the character of one his intermezzos. Camilla Tilling sings her solo in "Ihr habt nun Traurigkeit" will eloquence but perhaps lacks the finest sense of purity that some bring but this is a relatively minor criticism as, unlike far too many soprano soloists these days, she is completely free of mannerisms and a blustery tone. In his contributions, Detlef Roth is authoritative and commands complete attention and like Tilling, his tone is never forced even in the most taxing passages.

Despite the obviously massive forces at his disposal, Janowski is relatively severe in their deployment - the brass timbres are reminiscent of period instruments and the strings suffer none of the normal problems associated with large numbers in faster music whilst blossoming in more radiant passages. Particular mention must be made of the balance achieved between organ and orchestra; the king of instruments is just audible but never dominates or obliterates detail; the extra impact in the bass registers when it is deployed is palpable. As one has come to expect from the many years he worked in Birmingham before moving to Berlin (like his music director a few years later), Simon Halsey has, again, done wonders with the choir achieving the sort of clarity that one usually associates with crack ensembles a third-half their size. In summary, these musicians have placed themselves at the service of the score and all their interpretative decisions draw attention to Brahms, never themselves. A trait too often lacking in many conductors and singers alike.

The sound is beautiful too and just serves to highlight the many, many felicities that this combination of artists reveal in the score. Incredibly this is not just a live recording (which is hard to detect until approaching concert hall volumes) but also it was taped in the Philharmonie - a notoriously difficult venue to capture without making the soundstage seemingly collapse as soon as things quieten - and manages to capture the positive warm sonic characteristic without any of the oddities that are experienced in all too many sections of the auditorium.

A very considerable achievement from all concerned - this recording is one of those rare beasts that has you reflecting purely on the music, not the musicians. 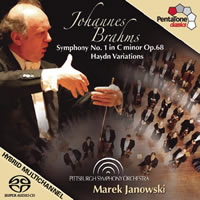 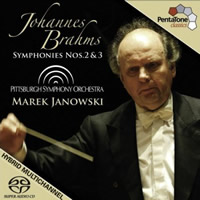 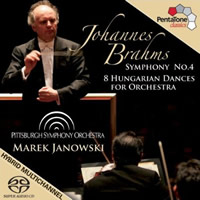