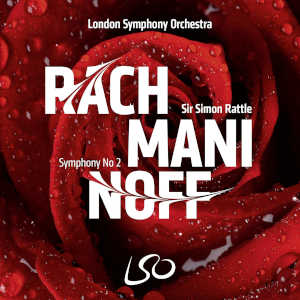 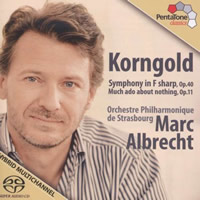 Korngold: Symphony in F sharp major Op. 40, Much ado about nothing Op. 11

It is quite surprising that it has taken so long for any of Korngold’s orchestral music, apart from the Violin Concerto, to appear on SACD. The composer’s lush and extravagant late-romantic style of composition that displays both his rich melodic gift and dazzling orchestrations should have made him an obvious choice for any record company wishing to proselytise the indisputable benefits of high-resolution and multi-channel sound.

The main work on this disc is the Symphony in F sharp that Korngold completed in 1952 although he had been planning a large-scale symphony for some years earlier.
This symphony has had mixed fortunes since its disastrous, ill-rehearsed Viennese premiere under Harold Byrns in 1954. Throughout the 50’s and 60’s it was considered to be a hopelessly old fashioned work, a dinosaur surviving from the age of huge late-romantic symphonies. In 1972, however, it received a performance in concert by Rudolf Kempe and the Munich Philharmonic which, a couple of years later, was issued on LP by RCA and eventually appeared on CD (Varèse Sarabande). Since then more conductors have taken up the symphony’s cause and its fine musical qualities have gradually become to be appreciated. At a time when an apparently unstoppable plethora of Mahler symphonies keep appearing on disc this excellent PentaTone release is especially welcome.

The menacing opening of the first movement with its harsh dissonant chords and use of xylophone and marimba seems, at first, to suggest a very different composer from the one made famous by his early operas and Hollywood film scores. Gradually more consoling and melodic themes appear, but the feeling of unease and tension remains throughout the development section of this brilliantly constructed movement. The sinister conclusion with the clarinet softly playing the main theme over col legno strings is impressively chilling.

The energetic and urgent scherzo is full of virtuoso orchestral writing. Wonderfully ripe heroic horn calls appear (1’35”) that immediately bring to mind Korngold’s many film scores. The music eventually reaches an imaginatively scored slow and mysterious trio section before the return of the main scherzo theme and a brief coda.

It is in the magnificent slow movement that Korngold seems to look back most closely to the symphonic style of Mahler. The solemn three-note theme with which the movement opens evolves into a threnody of overwhelming power and grandeur. The actual theme is taken from the score Korngold composed in 1939 for the Warner Bros. film ‘The Private Lives of Elizabeth and Essex’ but here is expanded into music of great poignancy that once heard will haunt your mind for days.

The opening of Korngold’s rondo finale immediately dispels the tragic mood of the preceding Adagio with a genial theme that creates a light-hearted mood. As the music progresses the composer gradually recalls the music from the earlier movements to reach a satisfyingly up-beat conclusion.

Marc Albrecht directs a splendidly powerful and penetrating account of the symphony. He elicits taut incisive playing from his Strasbourg orchestra and his tempi in all four movements seem particularly well chosen. He never allows the opulent orchestration to obscure inner detail and his committed and dynamic approach to this piece avoids any trace of cloying sentimentality. L’Orchestre Philharmonique de Strasbourg responds with fine playing from all sections, but especially the horns.

The other work on the disc is the 5-movement suite from the incidental music that Korngold wrote for a performance of Shakespeare’s ‘Much ado about nothing’. Scored for a smaller orchestra than the symphony this genial music possesses a nostalgic fin-de-siècle quality while at the same time vividly illustrating various episodes in the play. Albrecht and his orchestra give an affectionate performance of this delightful suite and it makes a fitting end to this fine disc.

The recording, as engineered by Wolfram Nels and Philip Knopp, is sumptuous and rich as befits the music, but it has also captured a little too much of the reverberant acoustic of the Salle Erasme, Palais de Congrès, Strasbourg, and this produces a generalised rather than a detailed sound picture that, though flattering to the strings is less so to brass, timpani and percussion, which lack detailed location. Nevertheless, this is a recording that must be highly recommended to all lovers of Korngold’s music.

Just a mini-review to add my support to Castor's conclusions.

As noted, the opening is disconcerting in its use of dissonance and rather sparse (unusually so for Korngold's perceived style) instrumentation; it is not long before the Korngold style that many love creeps in and supplants this, so do not be put off by any excerpts from the opening. It is striking how confident and disciplined the Strasbourg forces are here - they sound possessed (in a good way) throughout the disc and the joy and swagger exhibited in the Finale (marked Allegro gaio) is exemplary and puts a smile on this face every time it is heard. A wonderful tribute to the hard work that Albrecht has done with the orchestra. Why this symphony has not been so popular is probably that Mahlerian tendencies can easily be heard but unlike Mahler, Korngold seems to lack the courage of his convictions and so tension that so easily could have been created in the slow movement (in particular to these ears) is passed over in favour of rapid development of ideas or progression to other themes - a shame. Still, Albrecht gives a fabulous account, taut yet rhapsodic in approach that revels in all the detail yet convincingly displays the structure - it is tempting to say that it surpasses every other account previously issued.

The suite from "Much ado about nothing" is sheer delight from beginning to end, especially in these hands. A true revelation of music making from the orchestra and conductor alike - this is playing that fills the heart with joy and makes the listener want to burst into song; surely no better complement can be paid than that! The Overture is particularly appealing, as is the wonderful cello solo that opens the Intermezzo.

I found the recording to be perfectly suited to the music and reveals all the detail in the rich orchestral textures with remarkable ease given the very rounded sound accorded to Korngold's scores by both orchestra and engineers alike. For all the opulence, there is not a trace of congestion or cloudiness to be found in even the most taxing moments.