This coupling is an amalgamation of two 4-channel Vinyl recordings from the 1970's featuring Eugene Ormandy and the Philadelphia Orchestra. The Saint-Saens recording in ... 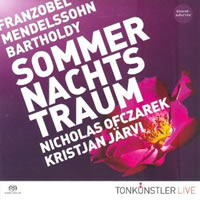 The high hopes were tainted within seconds of the overture starting for these fairies and elves are leaden footed and the magic is veiled thanks to the tempo chosen by Jarvi which are all too often on the slow side of sluggish; the orchestral playing in itself though is wonderful. The same hopes were dashed and then trampled upon as soon as Nicholas Ofczarek opened his mouth; not for his manner of speaking but rather the text he has to deliver; his characterisations are good in themselves.

Now you might be thinking, how can Shakespeare's text be a problem? Well the problem is that of omission - here we have text-intermezzi from FRANZOBEL (an Austrian poet) that are about as far from the character of Shakespeare's play as the proverbial chalk is from cheese. FRANZOBEL is seemingly obsessed with sex (not that Shakespeare was in any way prudish but this is on another level and far less subtle and witty) and also completely "transforms" the mood and style of this great play into something completely different. Updating is one thing, this is another.

For those interested, the vocal items are sung in German, with the original words that Mendelssohn set. However, it would be charitable to say that Christiane Oelze and Michelle Breedt sang all the notes that Mendelssohn set - incredible that these soloists are less accurate than those of Beethoven: Piano Concerto No. 5 - Brautigam, Parrott who are "mere" choral members.

The various comic points are met with studied silence by the Viennese audience, impressive in one way but telling in the most important. The sound is good but really this aspect of the recording is immaterial when the performance is so flawed from a conducting, singing and textual perspective.